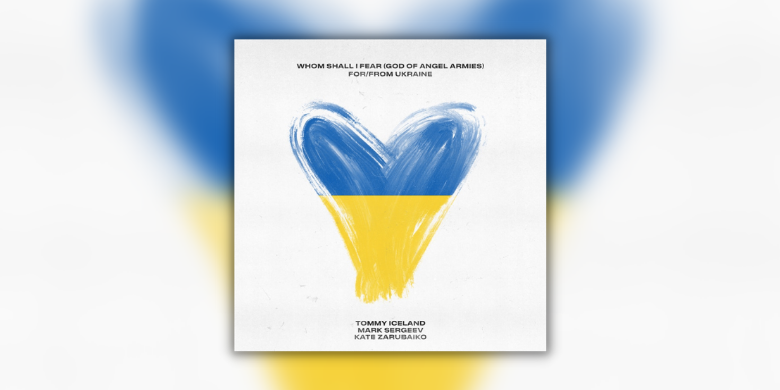 It was a couple of days after the war began in Ukraine that Tommy Iceland, an Iceland-born, Sweden-raised, and now Nashville, TN-based songwriter was prompted by God to record “Whom Shall I Fear (God Of Angel Armies).” Listen to the song HERE. Originally by Chris Tomlin, Iceland knew a new version of the song needed to be made and feature a Ukrainian worship leader.

“It was very early on that I felt we needed to do Tomlin’s ‘Whom Shall I Fear (God Of Angel Armies),’” Iceland explains. “I was listening to that song and the lyrics just struck me differently, especially with this war in mind. “

He also knew it was important that the song would come directly out of Ukraine and from the people facing the terror of war. “At that point, I didn’t know any worship leaders in Ukraine but I did know others around the world,” he shares. “I’ve been able to have a global perspective by growing up in Europe and I care so deeply about churches all around the world.”

Through mutual friends, he was connected to Mark Sergeev, a worship leader and youth pastor of Melitopol Christian Church located in south Ukraine. When they first connected on March 1st, Iceland knew he was the voice to use for the song.

“I got to know Mark better and he’s just genuine,” he says. “He has such a heart for God and his whole life is about bringing the Gospel to people at any cost. That’s something I’ve seen during this war – he’s willing to lay down his life to share the Gospel.”

At that same time, Sergeev, his wife, and their three children were hiding underground with others from their congregation in the basement of their church. Bombs were literally going off just outside, taking over the city.

“Mark told me that he loved the idea and wanted to do the song but at that particular time, they didn’t even know if they were going to make it out alive,” Iceland shares. “It wasn’t a long text because of what was happening at that moment, and when our messaging stopped I just broke down – I had no idea if he and his family were going to survive the night.”

The next day they were able to talk, but by then the Russians had occupied Melitopol. Continuing to hide in the church basement, which also stored recording equipment, Sergeev was able to record the vocals although the recording couldn’t get sent due to Russia shutting down all internet services. Iceland didn’t hear from Sergeev for a couple of days but miraculously two days later the song file arrived and the song was able to get finished.

Then, in the middle of the night on March 9, Sergeev was abducted by the Russian soldiers and was under threat of being killed. He ended up being released the next day and is now back with his family.

With an initial threat of any use of his voice or name for this song could be detrimental to his life, Sergeev made it clear that he wanted his voice to be used for the recording, to share hope around his country and around the world of what is happening.

The final touch on “Whom Shall I Fear (God Of Angel Armies)” includes an additional verse written by Iceland and sung by nine-year-old Kate Zarubaiko, also from Ukraine and whose family has fled to Sweden. You can hear her voice, along with Mark Sergeev and Tommy Iceland by clicking on the lyric video below.

WHAT CAN YOU DO TO HELP?

Sergeev and his boys

Photos from the church basement

after Sergeev was abducted