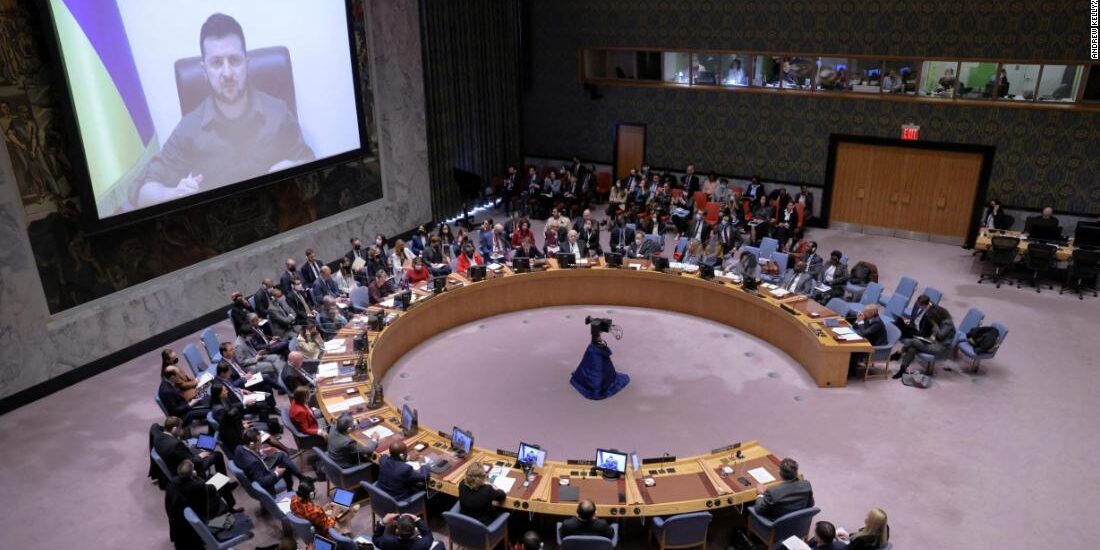 (CNN)Ukrainian President Volodymyr Zelensky accused Russian troops of indiscriminately killing civilians “just for their pleasure” in an emotionally-charged address to the United Nations Security Council on Tuesday, before questioning the very mandate of the Security Council itself.

Zelensky’s speech came a day after he visited the Kyiv suburb of Bucha, where shocking images of bodies in the streets emerged over the weekend.

On Tuesday, he related the aftermath of Russia’s retreat from the town in horrifying detail, describing entire families killed, people with their throats slashed, and women raped and killed in front of their children. Zelensky said Russia’s actions were no different from those of a terror group, except that Russia is a permanent member of the UNSC.

The Ukrainian leader then criticized the body, asking representatives point blank: “Where is the security that the Security Council needs to guarantee? It is not there, though there is a Security Council.”

Zelensky added: “It is obvious that the key institution of the world designed to combat aggression and ensure peace cannot work effectively.

“Ladies and gentlemen, I would like to remind you of Article 1, Chapter 1 of the UN Charter. What is the purpose of our organization? Its purpose is to maintain and make sure that peace is adhered to. And now the UN charter is violated literally starting with Article 1. And so what is the point of all other Articles?” he asked.

At least 1,480 civilians have been killed and at least 2,195 have been injured in Ukraine between the start of the Russian invasion on February 24 and April 4, a UN official said at the meeting, citing updated numbers from the Office of the High Commissioner for Human Rights (OHCHR). The latest figures on the number of Ukrainian civilians in the conflict had “more than doubled” since the last briefing to the UNSC on March 17.

In Bucha, bodies strewn across the streets and in basements were found by human rights groups and documented by independent journalists. Satellite images suggest some bodies had been there since at least March 18.

In his damning speech, Zelensky said there was “not a single crime” that the Russians “would not commit,” alleging that Russian troops had “searched for and purposefully killed anyone who served our country.”

“They shot and killed women outside their houses when they just tried to call someone … They killed entire families, adults and children and they tried to burn the bodies,” Zelensky said.

“I am addressing you on behalf of the people who honor the memory of the deceased every single day and in the memory of the civilians who died, who were shot and killed in the back of their head after being tortured,” he told the UNSC.

“Some of them were shot on the streets. Others were thrown into wells, so they died there suffering. They were killed in their apartments, houses, blown up by grenades. Civilians were crushed by tanks while sitting in their cars in the middle of the road, just for their pleasure,” he continued. “Women were raped and killed in front of their children. Their tongues were pulled out only because the aggressor did not hear what they wanted to hear from them.”

Zelensky also warned that the horrors found in Bucha would be replicated in other cities across Ukraine. Demanding accountability, he called for any Russians who have given “criminal orders” and “carried out them by killing our people” to be brought before a tribunal, similar to the Nuremberg trials that occurred after World War II when Nazis were put on trial.

Separately, the United Nations on Tuesday said that the shocking images from Bucha showed “all the signs” that civilians were “directly targeted and directly killed.”

In a virtual press briefing, OHCHR spokesperson Liz Throssell said the reports emerging from Bucha and other areas were “very disturbing developments.”

She specifically referenced the “disturbing” images of people with their hands tied behind their back and of partially naked women whose bodies have been burnt as further evidence suggesting the direct targeting of individuals.

“We have been talking about war crimes in the context of shelling, bombardment, and artillery attacks. Now they need to be investigated. But you could argue there was a military context, for example, to a building being hit. It’s hard to see what was the military context of an individual lying in the street with a bullet to the head or having their bodies burned,” Throssell continued.

As the OHCHR is trying to currently gain access to Bucha, she didn’t have “exact information” to share regarding the situation on the ground.

Throssell also paid tribute to the “crucial role” that journalists are playing in documenting these scenes, mentioning the “multiple teams” involved in “reporting, analyzing, and sending video footage.”

Russia has repeatedly denied the alleged atrocities, despite increasing evidence suggesting otherwise. Vassily Nebenzia, the Russian ambassador to the United Nations responded to Zelensky’s remarks, calling the accusations against the Russian military “ungrounded.”

“We place on your conscience the ungrounded accusations against the Russian military, which are not confirmed by any eyewitnesses,” Nebenzia said in translated remarks.

The ambassador recalled Zelensky’s election to the Ukrainian presidency in 2019, stating that hopes that Zelensky would end the fighting in the Donbas region of Ukraine “failed to materialize.”

Nebenzia also repeated past claims that “a huge amount of lies about Russian soldiers and military” continue to proliferate.

Addressing Zelensky directly, Nebenzia concluded his remarks by claiming Russia “came to … Ukraine” to bring peace, not to “conquer lands.”

Nebenzia’s words echoed those of Kremlin spokesman Dmitry Peskov earlier Tuesday, who called the allegations not only “groundless, but … a well-staged tragic show” and “a forgery in order to try to denigrate the Russian army.”