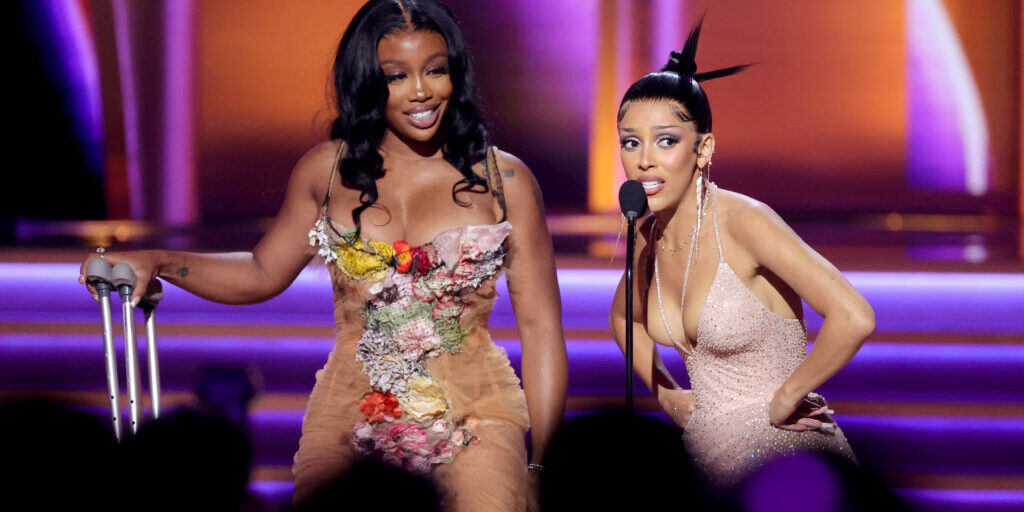 “Kiss Me More,” which was also up for Song of the Year and Record of the Year, appears on Doja Cat’s latest album, Planet Her.

SZA, who had to use crutches after twisting her ankle the night before, was joined by Doja Cat on stage to accept their award.

Crazy day man. SZA twisted her ankle the night before the awards, really hours before. She almost cancelled. It was super inspiring to see her power thru and make it at the tail end of the red carpet and then go up on stage with crutches to get the trophy with doja. Salute. 🙏🏽

Following her Grammy win, SZA appeared in the TV/radio press room backstage, where she was asked to give a status update on her sophomore album.

“[It’s coming] very much soon,” she confirmed. “I just actually finished it up recently in Hawaii.”

When asked to share more details, SZA said, “It’s probably my most unisex project yet — if that makes sense. It’s definitely for everybody in a different way.”

Since releasing Ctrl, SZA has earned a few more hits. Her 2020 track “Good Days,” which was nominated for Best R&B Song at the 64th Grammy Awards, peaked at No. 9 on the Billboard Hot 100.

“I Hate U,” her latest song, peaked at No. 7 on the Hot 100. It also made history on Apple Music as the most-streamed R&B song by a female in its first week.

At this time, SZA hasn’t confirmed if either song will appear on her second album.