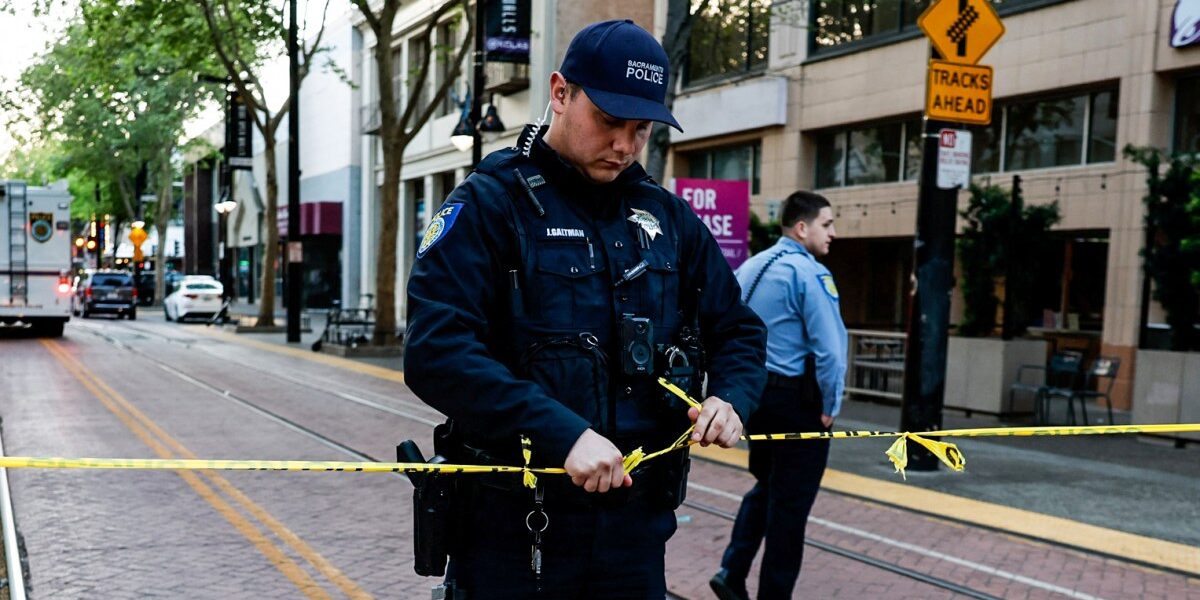 Shattered glass remained inside a shuttered jewelry store while friends and family gathered to remember their loved ones hours after authorities announced an arrest in the deadly shooting.

“This is not OK,” Patricia Powell said through heavy sobs.

Her brother, DeVazia Turner, 29, was out Saturday night out with friends and his cousin, Sergio Harris, at the nearby London nightclub before he was killed. Harris, 38, was also killed.

“I’m not going to see him no more,” Powell cried.

Turner’s father, Frank Turner, shook his head as the family attempted to console Powell. He said his son was a devoted father of four with a “bubbly” personality that lit up any room he walked into.

“His whole life revolved around his kids,” Turner said Monday afternoon, standing near the site where his son was gunned down. “He was really a family man. That was his passion — his kids.”

Turner’s children, aged 10 to 3, are staying with Frank Turner, who said they are too young to fully grasp the tragedy.

“He was a very bubbly person,” Turner said. “He brought a smile to your face. You just liked to be around him.”

As part of their investigation, authorities served search warrants at three residences, which turned up at least one handgun, police said. The surviving victims have wounds from minor to critical.

The shooting occurred in a bustling downtown area shortly after last call. Investigators believe multiple shooters opened fire in the wake of a large fight.

During the preliminary processing of the scene, police said, investigators identified at least three buildings and three vehicles that had been struck by gunfire. Investigators recovered more than 100 shell casings.

More than 100 video or photo files have been provided to investigators through the community evidence portal. The Sacramento County District Attorney’s Office will review all evidence to determine appropriate charges, police said.

Martin was booked into jail in Sacramento County on two felony counts of assault with a deadly weapon and a felony count of being a convicted person carrying a loaded firearm, according to online records from the sheriff’s office.

It was not immediately clear Monday afternoon whether Martin had retained an attorney.

Martin also has an outstanding warrant from the Riverside County Sheriff’s Department. He is scheduled to appear in court Tuesday afternoon, jail records said.

Martin pleaded guilty in October 2014 to a misdemeanor charge related to a domestic violence case, said a spokesperson with the Riverside County District Attorney’s Office. Martin was sentenced to 30 days’ custody and 36 months of probation. He violated two terms of probation, and a $5,000 bench warrant was issued in October 2015, the spokesperson said.

The Sacramento County Coroner’s office identified the four other victims as Joshua Hoye-Lucchesi, 32; Johntaya Alexander, 21; Yamile Martinez-Andrade, 21; and Melinda Davis, 57, a homeless resident of a nearby park.

Kay Harris, 32, Harris’ sister, told The Associated Press that she had been asleep when a family member called her to say they feared her brother had been killed.

Sacramento Police Chief Kathy Lester said officers near the scene heard the gunfire around 2 a.m. They rushed to the site, administered CPR and secured the scene, she said.

At least one city security video camera captured some of the violence, Lester said.

“The scale of violence that just happened in our city is unprecedented in my 27 years at the Sacramento Police Department,” Lester said.

“Today, America once again mourns for another community devastated by gun violence,” he said in a statement Sunday.

“But we must do more than mourn; we must act.”