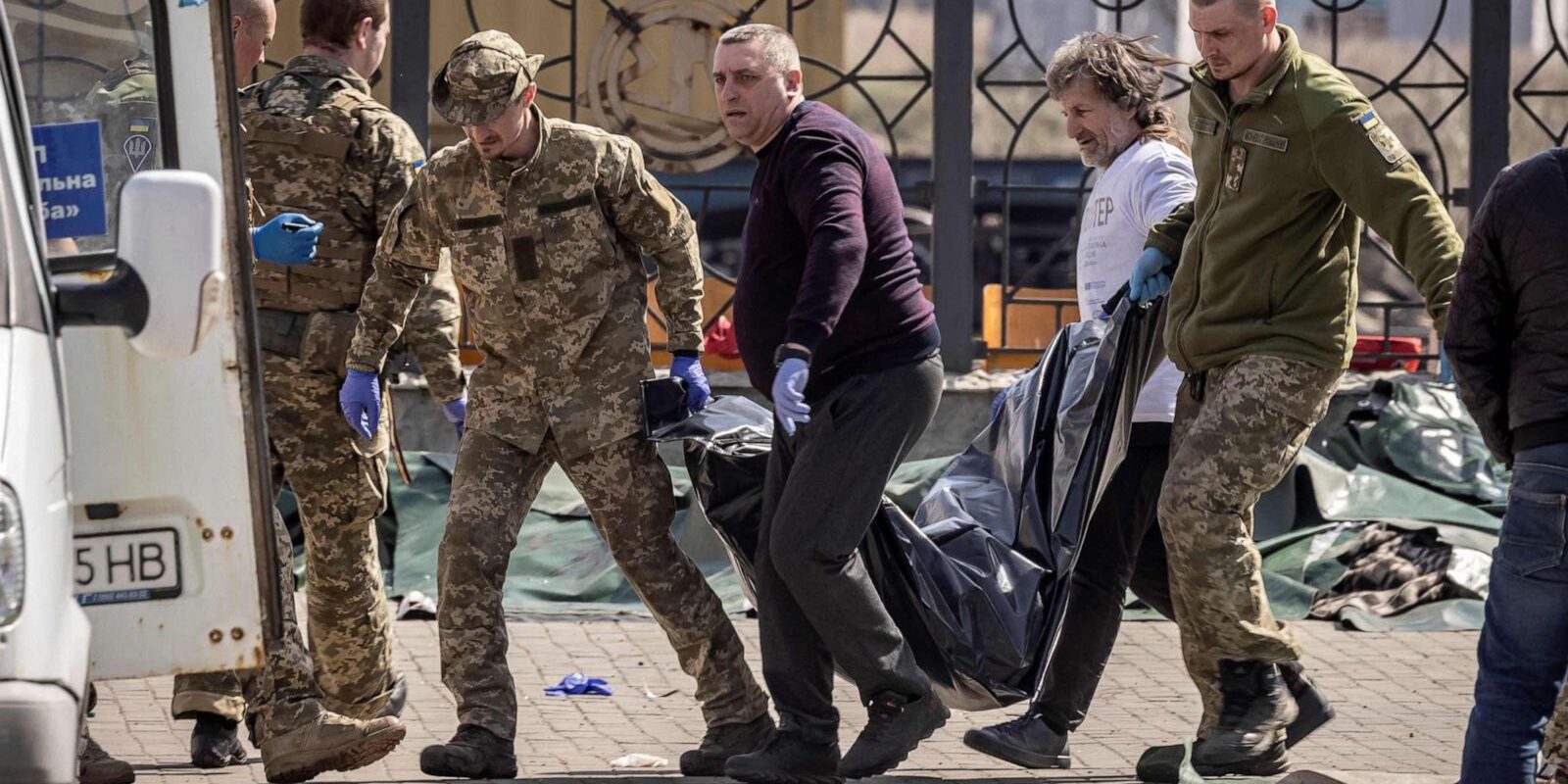 Russian President Vladimir Putin’s “special military operation” into neighboring Ukraine began on Feb. 24, with Russian troops invading from Belarus, to the north, and Russia, to the east. Russian forces have since been met with “stiff resistance” from Ukrainians, according to U.S. officials.

In recent days, Russian forces have retreated from northern Ukraine, leaving behind a trail of death and destruction. After graphic images emerged of civilians lying dead in the streets of Bucha, a town northwest of Kyiv, the United States and European countries accused Russia of committing war crimes.

A look at the two leaders at the center of the war in Ukraine and how they both rose to power, the difference in their leadership and what led to this moment in history.

Russia denied its involvement in a rocket attack that killed dozens of people at a train station in eastern Ukraine on Friday.

Kremlin spokesman Dmitry Peskov alleged that the involvement of Russian forces in the attack on the railway station in the Ukrainian city of Kramatorsk was already ruled out by the Russian Ministry of Defense, based on the type of missile that was used — a Tochka-U short-range ballistic missile.

“Our Armed Forces do not use missiles of this type,” Peskov told reporters during a press briefing Friday. “No combat tasks were set or planned for today in Kramatorsk.”

At least 39 people were killed in a rocket attack on a railway station in eastern Ukraine on Friday, authorities said.

Two Russian rockets struck the train station in the city of Kramatorsk in Donetsk Oblast on Friday morning, according to Ukraine’s state-owned railway company, which in a statement via Facebook called the attack “a purposeful strike on the passenger infrastructure of the railway and the residents of the city of Kramatorsk.”

By Friday afternoon, Donetsk Oblast Gov. Pavlo Kyrylenko confirmed that the death toll had risen from 30 to 39. He said in a statement via Telegram that another 87 were wounded, many seriously. The number of injured was down from earlier estimates of more than 100.

The attack occurred as “thousands” of civilians fleeing the Russian invasion were at the train station waiting to be taken to “safer regions of Ukraine,” according to Kyrylenko, who accused Russian forces of “deliberately trying to disrupt the evacuation of civilians.”

“The evacuation will continue,” the governor added. “Anyone who wants to leave the region will be able to do so.”

Graphic images provided by Ukrainian officials showed the aftermath of the attack — bodies lying on the ground next to scattered luggage and debris, with charred vehicles parked nearby. The remains of a large rocket with the words “for our children” in Russian painted on the side was also seen on the ground next to the main building of the station. Ukrainian President Volodymyr Zelenskyy said in a statement via Facebook that a Tochka-U short-range ballistic missile was used in Friday’s attack.

Earlier this week, large crowds of people were seen waiting on the platform to board trains at the Kramatorsk railway station as they fled the city in Ukraine’s disputed Donbas region.

Since 2014, Russia-backed separatist forces have controlled two breakaway republics of the Donetsk and Luhansk oblasts in the Donbas. The separatists have been fighting alongside Russian troops to seize more territory there, after Russia launched its invasion of Ukraine on Feb. 24. Now, the Russian military is said to be refocusing its offensive in the Donbas as it withdraws its troops from northern Ukraine.

The head of the European Commission, Ursula von der Leyen, and the bloc’s top diplomat, Joseph Borrell, were due to arrive in Ukraine’s capital on Friday.

While in Kyiv, the pair will meet with Ukrainian President Volodymyr Zelenskyy. It will be their first visit to the Ukrainian capital since Russia launched its invasion on Feb. 24.

At least 30 people were killed and more than 100 others injured in a rocket attack on a railway station in eastern Ukraine on Friday morning, authorities said.

According to Ukraine’s state-owned railway company, two Russian rockets struck the train station in the city of Kramatorsk in Donetsk Oblast.

“This is a purposeful strike on the passenger infrastructure of the railway and the residents of the city of Kramatorsk,” Ukrainian Railways said in a post on Facebook.

Donetsk Oblast Gov. Pavlo Kyrylenko said the station was teeming with civilians fleeing the Russian invasion. Kyrylenko accused Russian forces of wanting “to take as many peaceful people as possible.”

“Thousands of people were at the station during the missile strike, as residents of Donetsk Oblast are being evacuated to safer regions of Ukraine,” Kyrylenko said in a post on Telegram.

Ukrainian President Volodymyr Zelenskyy confirmed that “thousands of peaceful Ukrainians were waiting for evacuation” when the rockets hit the station.

“Not having the strength and courage to confront us on the battlefield, they are cynically destroying the civilian population,” Zelenskyy said in a post on Facebook. “This is an evil that has no limits. And if it is not punished, it will never stop.”

Graphic images provided by Ukrainian officials showed the aftermath of the attack — bodies lying on the ground next to scattered luggage and debris, with charred vehicles parked nearby.