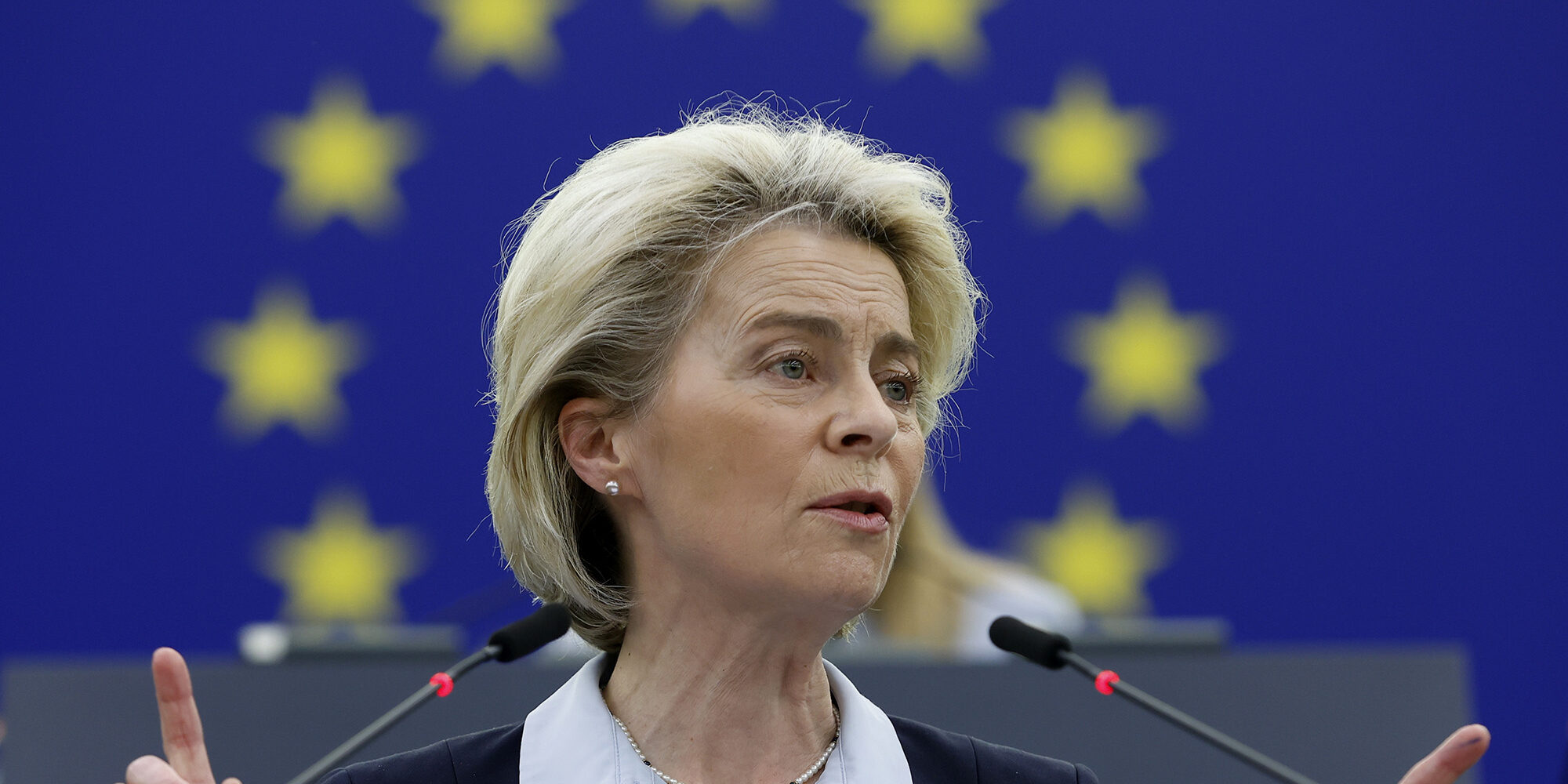 “At this critical point in the war we must increase the pressure on Putin again,” von der Leyen said in an address to the European Parliament in Brussels.

On Tuesday, the EU announced its plans to impose a fifth package of sanctions on Russia including an import ban on Russian coal.

These sanctions will not be our last sanctions. As I said already yesterday. Yes, we’ve now banned coal, but now we have to look into oil,” she said.

The EU also needs to look at the “revenues that Russia gets from fossil fuels,” she added.

Her remarks were echoed by European Council chief Charles Michel in a tweet Wednesday, saying that EU “measures on oil, and even gas will also be needed sooner or later.”

Explosions were reported late Tuesday in the Radekhiv area of Lviv region in western Ukraine, according to Ukrainian officials.

“Our air defense forces shot down two enemy cruise missiles over Radekhiv,” Maksym Kozytskyi, head of the regional military administration, said Wednesday on Telegram.
“The wreckage fell on the outskirts of the city, resulting in explosions at unused civilian infrastructure.”

A fire followed the explosion and was immediately extinguished by the State Emergency Service of Ukraine, Kozytskyi said. No casualties were reported.

“Last night, the occupiers’ fighter jets flying from Belarus hit the territory of Ukraine with cruise missiles,” the statement read. “Ruscists [Russian fascists] were aiming for civil infrastructure objects of Lviv region. But due to the successful actions of the anti-aircraft missile forces of Air Command West, two cruise missiles were destroyed, making it impossible for the enemy missiles to hit the target.”

Recent advances by Russian forces in Kharkiv could be setting the stage for the eastern Ukrainian city of Slovyansk to become the next target of Russia’s offensive, according to a report issued Monday by military experts at the Institute for the Study of War, a Washington-based think tank tracking the conflict.

“Efforts by Russian forces advancing from Izyum to capture Slovyansk will likely prove to be the next pivotal battle of the war in Ukraine,” which could give Russian forces potential paths to cutting off Ukrainian forces in the east and advancing further into the Luhansk and Donetsk regions, the report said.
“If Russian forces are unable to take Slovyansk at all, Russian frontal assaults in Donbas are unlikely to independently breakthrough Ukrainian defenses and Russia’s campaign to capture the entirety of Luhansk and Donetsk oblasts will likely fail,” the report said.

Russian forces withdrawn from the northern Kyiv region are likely a “spent force” and “unlikely to be effective elsewhere,” despite efforts to redeploy them, the report said.

In the country’s strongest denunciation yet of Russia’s invasion of Ukraine, Israeli Foreign Minister Yair Lapid described the killings in Bucha, on the outskirts of Kyiv, as “war crimes.”

“Once again, a large and powerful country has invaded a smaller neighbor without any justification,” he tweeted. “Once again, the ground is soaked with the blood of innocent civilians. The images and testimony from Ukraine are horrific. Russian forces committed war crimes against a defenseless civilian population. I strongly condemn these war crimes.”

As has been the case since Russia invaded Ukraine on February 24, Lapid’s comments — first made while speaking alongside his Greek and Cypriot counterparts — were in marked contrast to those of Israel’s Prime Minister, Naftali Bennett. While Bennett also condemned the killings in Bucha, he did not blame Russia.

“We are shocked by the horrific pictures coming out of Bucha, terrible scenes, and we strongly condemn them,” Bennett said after addressing Israeli soldiers in the West Bank. “The images are very harsh. The suffering that the Ukrainian people are facing is huge and we are doing all that we can to help.”

Some context: Israel is one of the few countries that maintains good relations with both Moscow and Kyiv. It is particularly wary of upsetting Russia, whose blessing it needs to carry out strikes on Iranian-linked targets in Syria.

On March 5, Bennett flew to Moscow — on the Jewish Sabbath — to meet with Russian President Vladimir Putin. He’s since held at least three calls with Putin, and half a dozen with Ukrainian President Volodymyr Zelensky, as Israel attempts to mediate between the two and bring an end to the fighting.

Yet the country’s stance — tacitly supporting international sanctions while providing only humanitarian aid to Ukraine — is coming under increasing pressure. Addressing Israel’s Parliament, the Knesset, last month, Zelensky criticized Israel for not doing more to help his country, warning that it would “have to live” with its decisions.

A fuel depot in east-central Ukraine was destroyed in a Russian airstrike overnight, according to Valentyn Reznichenko, the head of the Dnipropetrovsk regional military administration.

“The night was difficult,” he said on Telegram. “The enemy has attacked our region from air and hit the fuel depot and one of the plants.
“The fuel depot is destroyed. Rescuers have been fighting the fire for over 8 hours. Luckily, there are no casualties.”

Some context: Earlier Russian strikes interrupted rail service and sparked a fire Saturday in the Dnipropetrovsk region, and the office of Ukraine’s Prosecutor General said a criminal investigation has been opened into the attack.

“The Armed Forces of the Russian Federation, ignoring the norms of international humanitarian law, carried out a rocket attack on a civilian transport railway hub and an open area of the city of Pavlohrad,” according to a statement on Telegram from the office. “As a result of the airstrike of the Russian invaders, guided missiles damaged railway tracks and freight cars.”

There were no military facilities on the territory of the railway hub, the statement added.

A car crashed into the gate of the Russian Embassy in Bucharest, Romania, on Wednesday morning, according to the Russian state news agency TASS.

According to police, the driver has died, the Russian state news agency said.

Traffic has been restricted on the street where the embassy is located and law enforcement is investigating the causes of the incident, the report added.

Russian airstrikes and heavy fighting continue in the besieged Ukrainian city of Mariupol, according to an intelligence update from the UK Ministry of Defence issued Wednesday.

“The humanitarian situation in the city is worsening,” the intelligence update said, and “most of the 160,000 residents remaining have no light, communication, medicine, heat or water.”
“Russian forces have prevented humanitarian access, likely to pressure defenders to surrender,” it added.

Some context: On Monday, Mayor Vadym Boichenko said the southern port city was “on the brink of a humanitarian catastrophe,” with more than 100,000 people still requiring evacuation.

Ukrainian officials have consistently decried the Russian military for blocking humanitarian aid and reneging on pledges to allow evacuation corridors for civilians.

An evacuation convoy of seven buses accompanied by the International Committee of the Red Cross was held up Monday in Manhush, a Russian-held town to the west of Mariupol, according to Ukrainian Deputy Prime Minister Iryna Vereshchuk.

India’s ambassador to the United Nations condemned the killings of civilians in the Kyiv suburb of Bucha, marking a noticeable shift in Indian officials’ public approach to the invasion of Ukraine by its long-time partner Russia.

“We unequivocally condemn these killings and support the call for an open investigation,” Tirumurti said, without naming Russia.
“The situation in Ukraine has not shown any significant improvement since the Council last discussed the issue. The situation has only deteriorated, as well as its humanitarian consequences,” he said.

Some context: Previous statements issued by the Indian government have fallen short of condemning Russia’s aggression, with Prime Minister Narendra Modi instead appealing for a “cessation of violence.”

India has also abstained from various UN resolutions condemning Russia, maintaining that peace talks should be held and the two nations focus on “diplomacy and dialogue.”

Criticism from opposition at home: Tirumurti made his statement on the same day as India’s opposition Congress Party expressed concerns over the nation’s position on the war.

During a parliamentary discussion on the issue, Shashi Tharoor described India’s first UN statement in February as “deplorable.”

“I was shocked, I’ll say very honestly, at our first couple of statements at the United Nations … it was not just the abstention,” Tharoor said.

Fellow Congress Party lawmaker Manish Tewari spoke on the evolving geopolitics, saying “this new Iron Curtain has the potential of actually dividing the world,” and added that India “may not have the option of being able to sit atop this new Iron Curtain.”

“…Russia has been a trusted friend of India, and it has been a long-standing ally. Russia has come to India’s aid in probably our most difficult times … But then Mr. Speaker, sir, friends also have to be told if they are wrong, that they possibly need to get their act together,” Tewari said.

Discussion is scheduled to continue Wednesday with India’s Minister of External Affairs S. Jaishankar to respond.

Ukraine’s president told the UN Security Council that Russian troops killed for “pleasure,” while scenes of devastation from the Russian occupation have emerged from the outskirts of the capital, Kyiv, with bodies of civilians and ransacked homes among the rubble.

Here are the latest developments on the war in Ukraine: