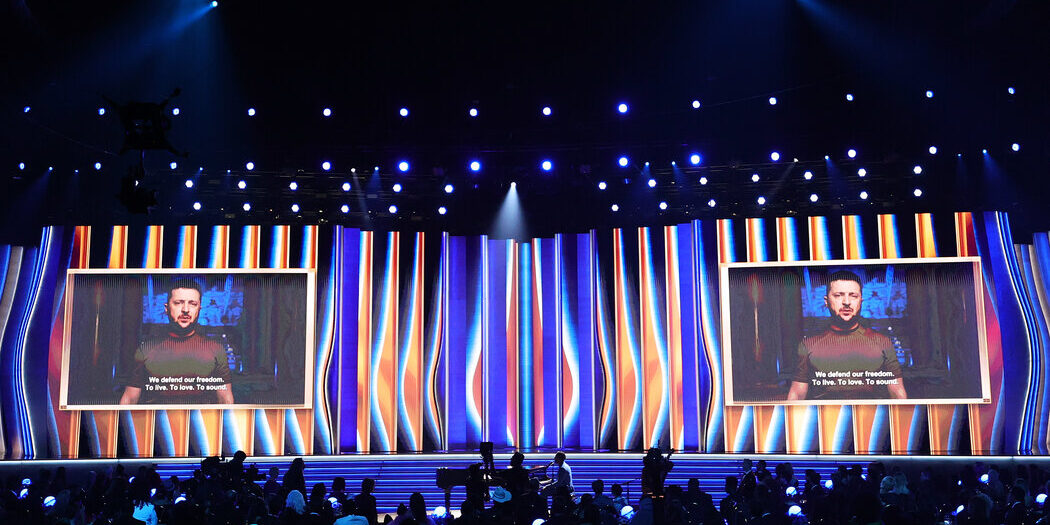 Volodymyr Zelensky, the president of Ukraine, addressed the Grammy Awards in a video, giving an emotional plea for support in his country’s war against Russia.

“What is more opposite to music?” Zelensky said. “The silence of ruined cities and killed people.”

The leader’s aides had lobbied for an appearance at the Academy Awards last week, but organizers did not commit to it, drawing some backlash.

In his brief address, Zelensky, an actor turned wartime leader, emphasized that many of the musicians in his country were fighting in the battle against the Russian invasion.

“Our musicians wear body armor instead of tuxedos,” he said. “They sing to the wounded in hospitals. Even to those who can’t hear them.”

After Zelensky’s address, John Legend performed his song “Free,” featuring a Ukrainian singer, Mika Newton, and a poet, Lyuba Yakimchuk, who fled the country days ago.

The war. What is more opposite to music? The silence of ruined cities and killed people. Our children draw swooping rockets, not shooting stars. Over 400 children have been injured and 153 children died. And we’ll never see them drawing. Our parents are happy to wake up in the morning in bomb shelters. But alive. Our loved ones don’t know if we will be together again. The war doesn’t let us choose who survives and who stays in eternal silence. Our musicians wear body armor instead of tuxedos. They sing to the wounded in hospitals, even to those who can’t hear them. But the music will break through anyway. We defend our freedom to live, to love, to sound on our land. We are fighting Russia, which brings horrible silence with its bombs. The dead silence. Fill the silence with your music. Fill it today to tell our story. Tell the truth about the war on your social networks, on TV. Support us in any way you can. Any — but not silence. And then peace will come. To all our cities the war is destroying — Chernihiv, Kharkiv, Volnovakha, Mariupol and others — they are legends already. But I have a dream of them living and free. Free like you on the Grammy stage.

Many in the music industry have made public statements opposing Russia’s invasion of Ukraine and showing support for the Ukrainian people. On Sunday night at the Grammys, the Recording Academy teamed up with Global Citizen to highlight its “Stand Up for Ukraine” initiative.

The three major record conglomerates — Sony, Warner Music and Universal Music — have all suspended operations in Russia in response to the war, along with the touring behemoth Live Nation, which released a statement saying the company will “cease work with any and all Russian-based suppliers.” Spotify suspended its streaming service in Russia and closed its office in Moscow.

How the Ukraine War Is Affecting the Cultural World

Valentin Silvestrov. Ukraine’s best-known living composer, Mr. Silvestrov made his way from his home in Kyiv to Berlin, where he is now sheltering. In recent weeks, his consoling music has taken on new significance for listeners in his war-torn country.

Paavo Järvi. The Estonian American conductor was in Moscow, leading rehearsals for an engagement with a Russian youth orchestra, when Russia began its attack on Ukraine. When he decided to stay there not to disappoint the players, many criticized his choice.

Alexei Ratmansky. The choreographer, who grew up in Kyiv, was preparing a new ballet at the Bolshoi Theater in Moscow when the invasion began, and immediately decided to leave Moscow. The ballet, whose premiere was set for March 30, was postponed indefinitely.

Musicians have also pledged solidarity with Ukraine, canceling shows and speaking out on social media. Green Day, My Chemical Romance, Björk, the Killers, AJR, Iggy Pop and others pulled out of shows in the region. Pink Floyd and David Gilmour yanked some of their music off digital providers in Russia and Belarus, writing in a statement on Twitter that the move was an effort “to stand with the world in strongly condemning Russia’s invasion of Ukraine.”

And artists have hosted benefit concerts across the globe. Arcade Fire held a last-minute benefit show in New Orleans in March, donating all proceeds of the pay-what-you-can event to a relief fund for citizens in Ukraine. Days later, the band said it raised over $100,000 after donating the proceeds from additional shows in New York. Ed Sheeran, Camila Cabello, Nile Rodgers and others played a benefit concert in England last week. At a New York fund-raiser where she performed alongside Gogol Bordello, a band with Ukrainian roots, Patti Smith announced a $50,000 donation to Doctors Without Borders on behalf of Yoko Ono and Sean Ono Lennon.