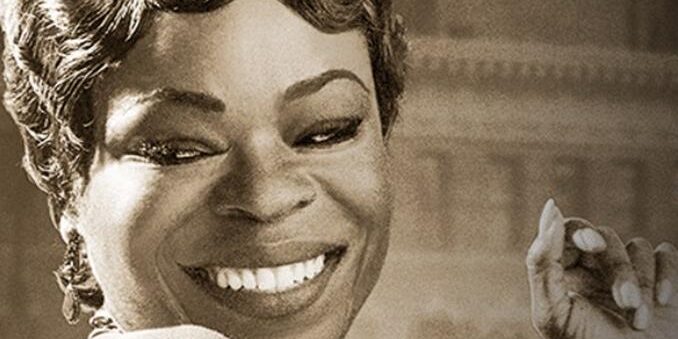 *Talking to Nija Okoro, it’s clear that she loves what she’s doing. You can hear the joy emanating from her voice when she talks about the theater, her acting career, and her latest show.

Up next for the talented actress is the lead role of Angel, in the Pearl Cleage drama, Blues For An Alabama Sky, now playing at the Mark Taper Forum through May 8, 2022. Opening night is April 13, 2022.

The character, said Okoro, has a lot of issues and has even more layers that she’s able to peel back and explore. She enjoys that process.

“That’s the good stuff,” she said.

Since taking on the role, Okoro has enjoyed the process of developing a rich, complex character, and is excited about sharing her with the audience.

Angel is described as a free-spirited Cotton Club singer who’s out of luck but never out of dreams.

The rest of the characters in the show – are just as interesting as Angel.

Her friend, Guy, is a costume designer waiting for Josephine Baker to invite him to join her in Paris.

Delia, a young activist, is trying to give the women of Harlem a choice about their future.

Sam, a prominent physician, is either delivering babies or out at the club letting the good times roll. And Leland, who recently arrived in Harlem from Alabama, is haunted by the wide-open skies and lost love he left behind.

The lives and dreams of these men and women converge with passion and politics as the art and celebration of the Harlem Renaissance give way to the harsh realities of the Great Depression.

Okoro, who grew up in the Bronx, is trusting the process. She loves the character, appreciates the author – and already has a working relationship with the show’s director – Phylicia Rashad, who played the role of Angel 25 years ago.

Okoro, a graduate of the Juilliard School, has appeared in some solid productions. She was in the national Broadway tour of “Jitney” directed by Ruben Santiago-Hudson, “Ma Rainey’s Black Bottom” directed by Phylicia Rashad at the Mark Taper Forum, “Two Trains Running” at The Matrix directed by Michele Shay, and the 2017 West Coast premiere of “The Legend of Georgie McBride” at the Geffen Playhouse.

“I just auditioned,” said Okoro who received a B.A. in psychology from City College of New York. “I didn’t think they would accept me. My high school, FAME High School, was across the street from Juilliard. I had a fear of not being good enough for the school. I just wanted to get over a fear of auditioning. So many from my high school auditioned but didn’t get in. When I got to audition, I realized, it was the opposite of what I thought. It’s a roll-up-your-sleeve kind of place. It’s very nurturing. It wasn’t snobby. I received a full scholarship. It was a free ride.”

I recently caught up with the affable Okoro, who was in her dressing room at the theater trying to be quiet so as not to disturb her castmates. She was eager to talk about Blues For An Alabama Sky.

DD: Describe the show in your own words.

NO: This showcase plays in the middle of the Great Depression. It’s 1930. There’s a stock market crash. There’s desperation. People are getting put on the streets. It’s about people fighting for what they believe in during the shift.

NO: She’s a bit of a mystery. She has a lot of secrets she holds. She’s from Savannah. She comes to Harlem to make something of herself. She just wants to survive. She wants to become a showgirl.

NO: I understand her. When I first read the script, I questioned her motivation. She does some dirty stuff in the play. I wish she knew how powerful and wonderful she is.

NO: I’m not one to not like something about my character.  I don’t agree with much of what she does. I have to understand what I’m doing and why I’m doing what I’m doing.

DD: Do you have to like a character, in order to play them?

NO: I don’t have to upon initially reading it. But invariably, I find something to connect to.

DD: Why did you want to do this show?

NO: I love Pearl Cleage’s work. I had never done one of her shows before. I’m doing this one because it was about Phylicia asking. I’ll always do something for her. If she asks, I’ll say, yes. Plus, I love working at this theater.

DD: Before you got the role, had you seen the show before?

NO: No, I had never seen it. I read it years ago, though.

DD: What was it about the show that attracted you to want to be part of the production?

NO: Honestly, Angel fascinated me in all the scary ways. She was such a mystery. The challenge of her thrilled and terrified me. I’ve never played a character like her. I knew that if I could get there, it would be revelatory for me.  I like to understand why people do what they do. She is very complicated. She has so much past trauma. She is suffering from PTSD.

DD: How did you develop Angel?

NO: I let her speak. I read the play over and over again. She started speaking to me. The more questions I have, the more the answers came. She has a lot of layers. The work is never done. It doesn’t end. The revelations keep coming.

DD: Can you sing?

NO: Not usually. Phylicia says I can. I used to turn down auditions even if it’s a little bitty singing. I’m discovering my voice, though.

DD: Do you understand the blues?

DD: Why did you become an actress?

NO: I was a bit of an overachiever in school. Everything came easy, except math. Acting was the hardest thing I had tried. Every role is a challenge. Nothing was cookie cutter. There was no formula.

DD: Do you like being nervous about going on stage?

NO: You ask good questions. I guess it’s better than not being nervous. I would be nervous if I wasn’t nervous. It doesn’t serve me to let the nerves overtake me.

DD: What happens to you when you’re on stage?

NO: If I’m at my best, I go moment to moment. I think to myself, what is the first thing I’m doing? It’s breath to breath. Looking at the whole picture overwhelms me. I connect with my first thought.

DD: How did you prepare for the role? How did you go about developing her? Were you able to bring something to the role or was it all on the page?

NO: It’s a combo of both. Cleage writes in such a way – that it seems like it’s on the page. The more you delve – it’s pointing to something else. Her work demands it.

DD: Do you learn anything new about yourself when you do a new show?

NO:  Good question. Yes, I do. I’m a really nice person. That’s my calling card. My middle name is “happy.” My character, Angel, will do whatever she needs to do to get what she wants. I try not to do that. Maybe I’m learning how much fun that is.

NO: I love to rehearse. I’m flexible. Phylicia is very special. I have worked with her several times. I love how she always goes off of you – the artist. She wants it to be honest. She’s looking at human connections and what’s underneath. She wants you to push past yourself. She is never going to let you look bad. Everyone shines. Everyone’s story gets told. She’s very meticulous.

DD: You have done a number of August Wilson plays. What is it that you like about his works?

NO: Everything. There is a rhythm to his work. There are a lot of similarities between Wilson and Cleage. They both have a beautiful way of putting something on the page.

DD: What is it about theater? What does theater do for you?

DD: Why should people come to see this show?

NO: Because it’s a brilliant reflection of the time. There is an easy and fast connection. It shows how human behavior and humanity don’t change. The audience will have a good time. I don’t know what they will take away. That’s none of my business.