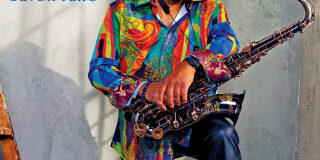 Well known for his classy virtuosity, Grammy nominated sax and flute player Najee has been one of the most influential figures in contemporary jazz for the past thirty plus years.  He enjoyed his first big break in 1983 when, with his brother Fareed, he toured with Chaka Khan.  This in turn brought him to the attention of producer Charles Huggins and it was through Huggins that Najee cut his debut long player for EMI, ‘Najees Theme’, in 1986.  The album went platinum and, as they say, the rest his history.  Since then Najee has added seventeen more releases plus one ‘best of’ collection. Now, on the Shanachie Entertainment label, he is back with his latest offering, ‘Savoir Faire’.

This cool collection is quickly up and running with the first single to be serviced to radio, ‘Dr Dolittle’ that features Frank Wilkens on piano, Freddie Fox on guitar plus a kick ass horn section comprising Mike Parlett on sax and the always excellent Lee Thornburg on trumpet, trombone and flugelhorn that sets the mood for what is to follow.

Of course the prowess of Najee on sax is equally matched by his artistry on flute and it is the latter that is showcased by the extremely engaging ‘Luna’ which is written by and features Mark Harris II on keys.  He stays with flute for the deliciously Latin flavored ‘Happiness (A Felicidade)’ where the vocals of Curtis King Jr. fit like a glove while elsewhere the appropriately titled ‘Valentine Love’ tells you all you need to know about this romantic cut that features Alyson Williams on vocals and Chris ‘Big Dog’ Davis on keys.

Davis is akin to smooth jazz royalty and another artist who always seems to be at the top of his creative game is guitarist Adam Hawley who steps up to add his own brand of contemporary jazz magic to the Barry Eastmond composition ‘Hurricane’.  Another Eastmond number, the tranquil ‘Isa Hermosa’, finds Najee on tenor being ably backed by Eastmond on keys, Freddie Fox on guitar and Al turner on bass.  He keeps it tender both for the sultry title cut and ‘Modern Lovers’ where a Stevie Wonder like vocal performance from Frank McComb proves to be the icing on a very enticing musical cake.

Composed by and featuring bass player David Dyson, ‘Bottom To The Top’ is an easy grooving gem and much the same can be said of ‘Bounce’.  This contemporary jazz master class, orchestrated by Najee and added to by joint composers and performers Paul Brown guitar, Roberto Vally bass and Leon Bisquera keys puts this one right up there with the best that ‘Savoir Faire’ has to offer.