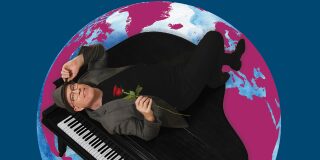 It was in 2016, with the CD ‘Connected’, that keyboard player Mark Etheredge took the world of smooth jazz by storm.  It was his first genuine foray into the genre and maybe it was the ten self penned songs or the plethora of A-List collaborators who rallied round to lend a hand but there seemed little doubt that here was an artist who had truly arrived.  Well that was then but as he slipped into the despair of alcoholism, faced the specter of bankruptcy, lost his West Hollywood home and watched on as his mother slowly slipped away, Etheredge’s world had turned on its head.  Yet through all of those dark times he found strength by composing and playing music.  Now, coming out of the other side and reunited with producer Paul Brown, he is back with the excellent ‘Love Planet’.

This fine collection of original Etheredge compositions is quickly up and running with the easy grooving title cut.  Superbly backed by Jay Gore and Paul Brown on guitars, Roberto Vally on bass, Lenny Castro on percussion and Joel Taylor on drums, the piece is afforded a velvety veneer courtesy of Ron King and Greg Vail on horns.  When this dynamic duo return to add more brassy magic to ‘Saucy’ the result is just as good and in this respect are helped in no small measure by Paul Brown who features on guitar.  In fact Brown has a presence throughout and he also picks up featured artist credits on ‘You & Me & We’ that was originally released as a single back in 2020.

Talking of singles the delicately rhythmic ‘Resonance’ was first serviced to radio back in 2019.  It includes drums from regular contributor Gorden Campbell and electric guitar from Shane Theriot while elsewhere Greg Vail on tenor sax features on the hugely melodic ‘Groove City’.  His input is again considerable with the mid tempo ‘Elated’ yet given the tumult that had characterized the last five years of Etheredge’s life it is not surprising that several tracks hang heavy with contemplation.

This is certainly the case with ‘Peace’ and again with ‘Golden Hour’ that Etheredge dedicates to his now deceased mother.

In terms of personal favorites the deliciously turned down ‘We’ll Make It Through’ is right up there with the best that ‘Love Planet’ has to offer yet all things considered the Smooth Jazz Therapy top tune is the extremely easy on the ear ‘Untethered’ that shimmers with the dazzling interplay that fizzes between Etheredge and guitarist Steve Oliver.

‘Love Planet’ is due out on August 12 and comes recommended.