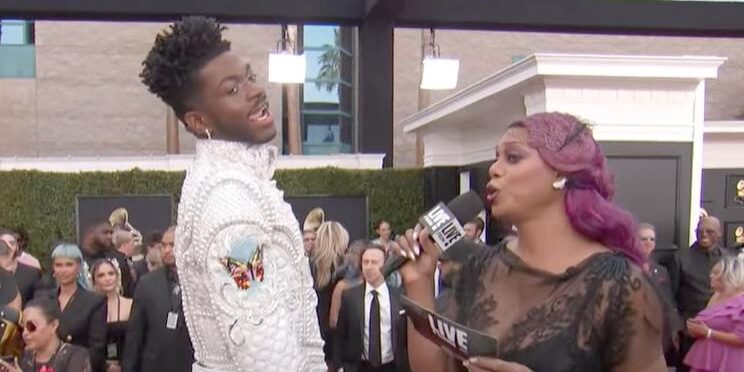 *Honey, Lil Nas X did not come to play!

The Montero artist showed up at the 2022 Grammys in a look from Balmain, telling Live From E!‘s Laverne Cox that the ensemble was chosen because he wanted “eat the whole night up.” As he put it, “We gonna knock it out tonight.”

Lil Nas X had good reason to go all out: He’s nominated for Best Music Video, Record of the Year, Album of the Year and Song of the Year, a truly impressive feat considering Montero is his debut studio album. And though he previously won a Grammy alongside Billy Ray Cyrus for “Old Town Road,” the star noted that people a/k/a haters didn’t think he’d attend another Grammy ceremony: “A lot of people did not expect me to be back here,” he said. “But I’m here, baby. Five nominations—let’s take some home!”

MORE NEWS ON EURWEB: Ye Told Kim K ‘He’s Going Away to Get Help’ – Do You Believe Him?

As for his performance, Lil Nas X kept the details to himself, saying, “I don’t want to ruin it for you. I’ll let y’all be the judge.”

The only thing he would say is “y’all may not be ready.”

Judging by his past performances though, Lil Nas X is bound to get the crowd up on their feet!

Suffice to say the competition is hot but Lil Nas X is already a winner in our books.

To see if your favorite artists are taking home a Grammy, check out the list of winners here!