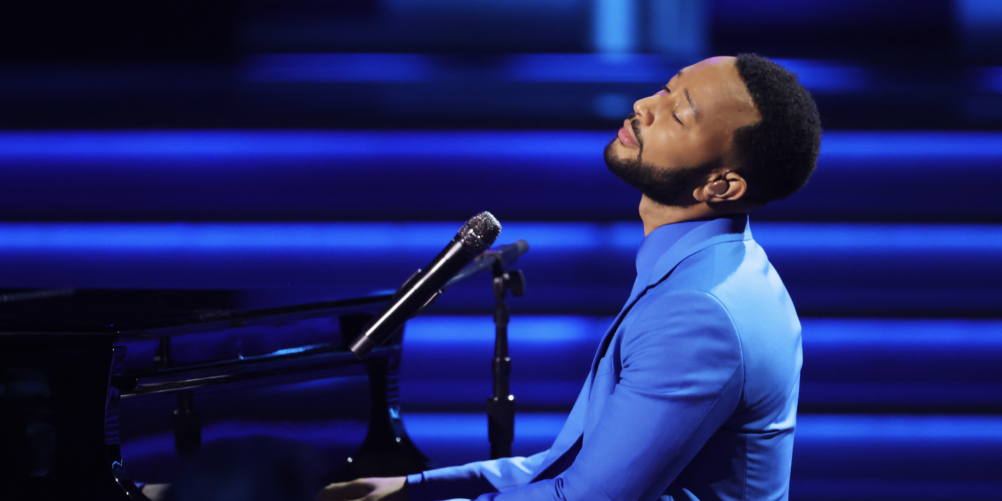 John Legend debuted a new song at the 64th Grammy Awards on Sunday night, which was held in Las Vegas, Nevada. The Grammy-winning singer/songwriter, who was honored with the Recording Academy’s first-ever Global Impact Award on Saturday, performed his latest single, “Free.”

Before he hit the stage, Volodymyr Zelenskyy, president of Ukraine, virtually appeared to give a sentimental speech about the power of music during difficult times.

“We are fighting Russia, which brings horrible silence with its bombs. The dead silence. Fill the silence with your music,” he said in the pre-taped video.

Stationed behind his piano, Legend delivered a stirring performance of the uplifting tune. “Caged birds singing / Break chains so we can / Do our holy dance / Let ’em ring through the valley / Soar to the mountain / Pierce to the core of the earth,” he sang.

Legend was joined by Ukrainian singer Mika Newton, whose sister is serving in the Ukrainian army, and poet Lyuba Yakimchuk, who fled from Ukraine just days ago.

“Free” is Legend’s first solo release of the year and third overall. In March, he teamed up with Sebastián Yatra on the Latin pop track “Tacones Rojos.” In February, Legend joined forces with Nas and Florian Picasso for “Tomorrow.”

“I am excited to partner with Republic Records in this next chapter of my career,” Legend said. “Everyone at the label has been so wonderful to work with. I am thrilled to take this new artistic and creative journey with them and look forward to sharing new music with people soon.”

On April 22, Legend will kick off his Las Vegas residency at Zappos Theater at Planet Hollywood Resort & Casino. He will perform 24 shows through Oct. 29.

“My 2022 Vegas residency featuring your favorite songs from my entire career.. full band… beautiful show…magical night,” he teased in a promotional trailer.

It was an honor to perform FREE tonight along with Lyuba Yakimchuk, Siuzanna Iglidan, Mika Newton, and our incredible choir. pic.twitter.com/7zYHep1mJG