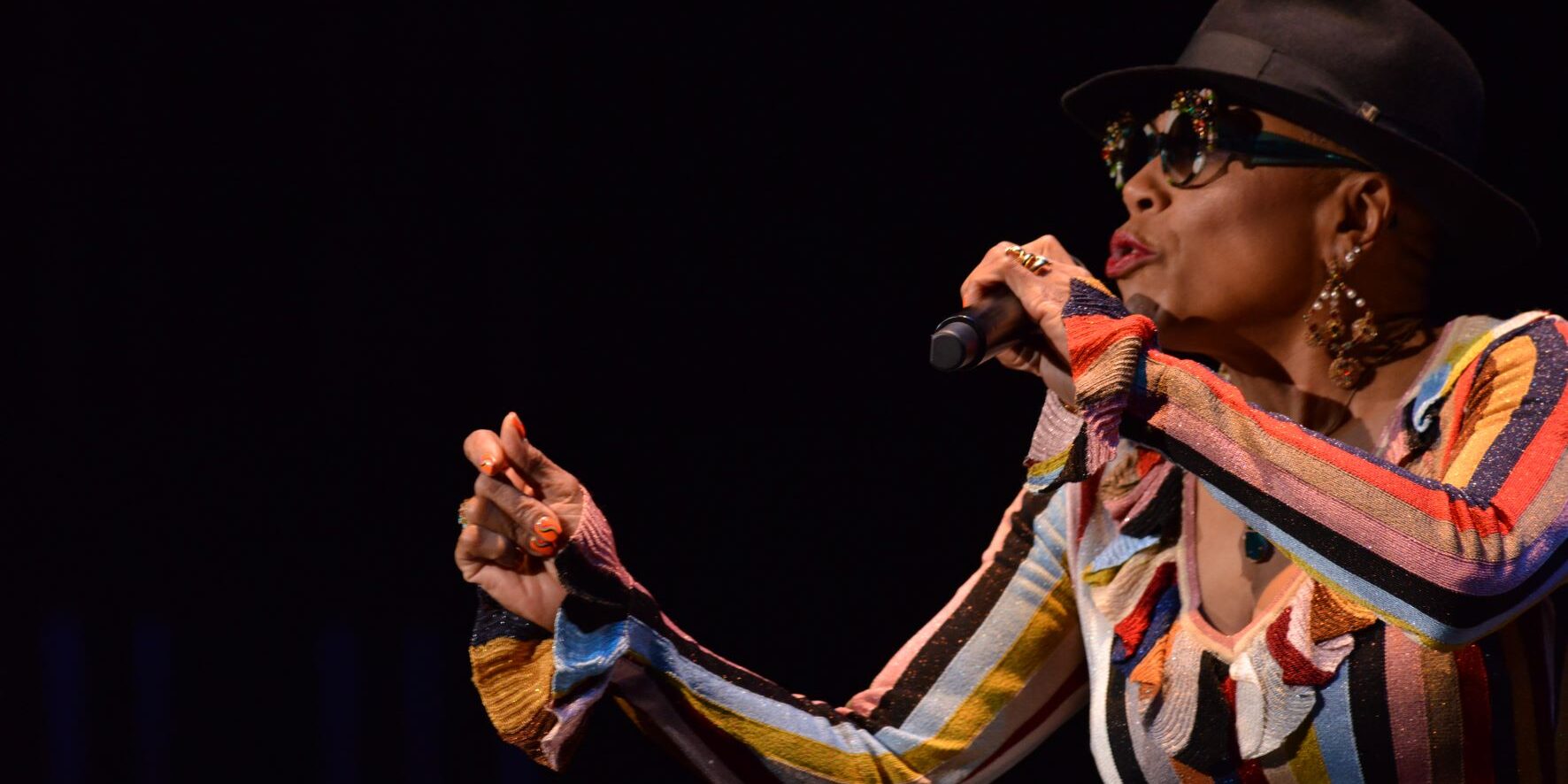 Let’s get this out of the way: The Savannah Music Festival is not a jazz festival. Held over the course of 17 days in late March and early April at various venues throughout the picturesque coastal Georgia city, the festival features just about every genre of American music—folk, classical, blues, soul, bluegrass, gospel, and, yes, jazz. That’s not a bad thing at all, though, because the result is not only a very manageable set of shows with no scheduling conflicts, but also an opportunity for jazz artists to reach a wider audience beyond the usual aficionados.

Perhaps no jazz artist better personifies the multi-genre approach than Dee Dee Bridgewater, who kicked off the jazz or at least jazz-leaning portion of the festival on a Friday night (March 25) with a performance by her Memphis Soulphony group, which has been doing material from Bridgewater’s album Memphis…Yes, I’m Ready off and on since 2017. The show is at this point seemingly a well-oiled machine, with Bridgewater now setting up each tune with a story about her affinity for the material, giving the set a nice narrative arc. The R&B and soul classics are made to order for Bridgewater, who was born and bred to do this material, having been born in Memphis and enthralled by the music coming out of WDIA radio—on which her father had once been a host, something she only found out many years later. Growing up as she did in Flint, in close proximity to Detroit and the sounds of Motown, didn’t hurt either.

Bridgewater’s vocal range enables her to hit notes in nearly every register, making her as comfortable with an Al Green song as an Otis Redding one. She even scatted a little during her take on Barbara Mason’s “Yes, I’m Ready,” in which she traded solos with the horn section. Not many R&B or soul singers can pull that off. Artistry aside, it’s her singular stage presence and sometimes lascivious choreography that conveys the music’s raw passion. From start to finish, Bridgewater is totally in sync with her crack band, featuring music director Barry Campbell on bass, Charleton Johnson on guitar, Keenan Shotwell on keyboards, David Mason on drums, Curtis Pulliam on trumpet, Bryant Lockhart on tenor saxophone, and Skylar Jordan and Shontelle Norman-Beatty on background vocals. In addition to “Yes, I’m Ready,” the set list featured their original arrangements of B.B. King’s “The Thrill Is Gone,” Bobby Blue Bland’s “Going Down Slow,” Al Green’s “Can’t Get Next to You,” Ann Peebles’ “I Can’t Stand the Rain,” Big Mama Thornton’s “Hound Dog,” Otis Redding’s “Try a Little Tenderness,” Elvis Presley’s “Don’t Be Cruel,” Gladys Knight’s “Giving Up,” and Carla Thomas’ “B.A.B.Y.” By the end, the usual stationary theater audience were up on their feet dancing in the aisles.

Showing another facet of her talents, Dee Dee stuck around Savannah and appeared on Saturday night as a guest with Christian McBride, Jeff Hamilton, and Eric Reed (subbing for a temporarily quarantined Benny Green) in their tribute to Ray Brown—a mentor to McBride, a bandleader for Hamilton, and a hero of Reed’s. The trio played songs either written or arranged by Brown, including “FSR,” “Milestones,” “Bass Face,” and “Captain Bill,” sharing stories about the colorful and bigger-than-life bassist between songs. Midway through the set, Bridgewater sat in with the trio for inspired versions of “More Than You Know,” “I’m Beginning to See the Light,” and “Bye Bye Blackbird.” It’s a swinging and improvisational side of Bridgewater that audiences have been seeing in recent months at her duo shows with pianist Bill Charlap. With both chops and theatrics, she sold these jazz standards just as effectively as the soul hits the night before.

The piano trio set themselves up in O.P. (Oscar Peterson) fashion with the band members so close to each other that Hamilton had no need for a stage monitor. Each member got multiple chances to show his particular artistry and command for hard-swinging jazz, whether it was Christian’s physicality on the bass during “Gettin’ to It,” which he recorded with Brown as a guest on his 1995 debut album by that name, or Hamilton’s trademark use of brushes on Kenny Burrell’s “Bass Face.” Reed, who succeeded Donald Brown (no relation) as jazz teacher at the University of Tennessee in Knoxville, shone on Ray Brown’s song for Count Basie, “Captain Bill,” managing to evoke Basie while also reflecting his own unique and very modern piano sound.

On the following night (Sunday), the trio returned sans Dee Dee, which enabled them to upgrade that same set with solo turns on their respective instruments. A highlight was Hamilton’s solo rendition of “Caravan,” in which he deftly captured the song’s distinctive rhythm and melody on his kit, using hands, brushes, and sticks. It’s become sort of a lost art for a drummer to play a melody that the layman listener can follow. Anyone who thinks it’s pandering clearly has not watched the Hammer (an ironic nickname Brown bestowed on his drummer of 15 or so years), who can play with as much fire and virtuosity as any contemporary poll-winning stickman.

Sean Jones and his quartet opened that Sunday-night show with a fiery set of their own, featuring original compositions and starting with “60th & Broadway,” a fast-tempo song Jones wrote in honor of his earlier stint as a member of the Jazz at Lincoln Center Orchestra. Tip of the hat aside, the trumpeter shares with Wynton Marsalis that special combination of chops and concept, heard on Jones’ tunes “Lost and Found” and “Two or Three,” the latter paying tribute to his early years in the Pentecostal church. Further demonstrating his conceptual side, Jones explored contemporary social and emotional issues in a piece from his suite inspired by Nigerian visual artist Peju Alatise, whose “Flying Girls” installation dealt with the effects of human trafficking. The social and emotional didn’t stop there, because Jones and his band—Allyn Johnson on piano, Kris Funn on bass, and Claudio Silva on drums, all with roots in the DC/Baltimore jazz scene—went on to present music from his Dizzy Spellz project, which connects Gillespie’s life force to Afrofuturism and takes an unvarnished look at the African diaspora in a musical blend of jazz, tap, hip-hop, and bebop. Yeah, that’s a lot to process, but if the music is visceral and compelling, the message becomes clearer. Bringing up the spectacular tap dancer (and singer) Brinae Ali, Jones and the band cut loose on “Pangea” and “PTSD (Post Traumatic Slave Disorder),” with Ali pounding the special wood floor, trading fours with Silva, and dramatically expressing with her feet and voice the joy and rage of being Black in America. Show-stopping and powerful stuff.

The festival also hosts the SMF Jazz Academy, which provides jazz education to area middle-school and high-school students. I didn’t see any of that program, but I did see about eight or so West Point cadets in the audience at every jazz show. Dressed and fit as they were, they sort of stuck out among the older baby-boomer crowd. Coming ostensibly for the Jazz Academy, they were rapt listeners for Bridgewater, McBride and company, as attentive an audience as you’ll ever see. I don’t think they were under orders to listen intently; you can’t fake enjoying music. Turns out that they’re part of a Cadet Jazz Forum run by saxophonist and West Point Band member Geoff Vidal, who often takes them from the military academy up the river down to Manhattan for jazz shows at clubs there. I’m happy that Geoff—who studied with Joel Frahm, among others—is arming these future soldiers with an appreciation of jazz, something that historically has proven to be an international force for peace.

In addition to all the great classical and roots music presented at the festival, including artists like Mavis Staples and Béla Fleck, the second weekend’s jazz performances featured the Emmet Cohen Trio, the Vijay Iyer Trio with Linda May Han Oh and Jeremy Dutton, and Samara Joy with the Pasquale Grasso Trio. All of the jazz shows I saw during that first weekend were in either of two theaters—the Lucas and the Trustees—both beautifully renovated old halls with a capacity of around 1,000. Unfortunately, the three shows I saw were never filled to that capacity and in some cases appeared to be only about a third full. Whether this was because of lingering pandemic fear, high ticket prices, or conflict with other shows (for example, the Saturday-night Ray Brown tribute performance was up against a Bruce Hornsby concert a block away), it was disconcerting given the level of talent on hand. Regardless, the production was flawless for all three shows, something that can’t always be said of festivals with multiple venues throughout a city. All in all, the Savannah Music Festival is a first-class event that showcases both great American music and a city with natural beauty and a rich cultural heritage. I can’t think of a better place to be in the early spring. I’ll be back in 2023.