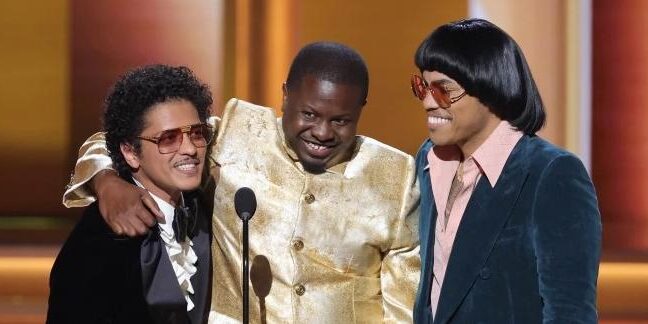 *(CNN) — Grammy Awards host Trevor Noah set up expectations moments into Sunday night’s show: Music’s biggest night is essentially one big concert where awards happen to be given out.

It was that, but because of a mid-show appearance from Ukrainian President Volodymyr Zelensky, who spoke of Ukrainian musicians in body armor and appealed for support, everything landed in a context that seemed to escape last week’s Oscars.

For a moment, the night of music and celebration stopped and the focus turned to the ongoing invasion and the plight of the Ukrainian people.

“The war — what’s more opposite than music?” Zelensky said. “We defend our freedom. To live. To love. To sound. In our land, we are fighting Russia which brings horrible silence with their bombs. The dead silence. Fill the silence with your music! Fill it today. To tell our story. Tell the truth about war.”

MORE NEWS ON EURWEB: Will Smith: The Hollywood Saint with the Now Tarnished Halo?

Here’s what else you missed:

It was a big night for three artists in particular, who walked away with the night’s four biggest honors.

Doja Cat and SZA also scored a memorable win — both for Doja Cat’s emotional response and her ill-timed bathroom break that almost robbed her of her moment. It all worked out, though, for the new winners of the best pop duo/group performance award.

The aforementioned appearance from Zelensky teed up a performance from John Legend, singing “Free,” while wearing a blue suit, a visual salute to the country of Ukraine.

He was accompanied on stage by Ukrainian singer Mika Newton, musician Siuzanna Igidan and poet Lyuba Yakimchuk in this affecting moment.

Foo Fighters drummer Taylor Hawkins was honored at the top of an In Memoriam segment that was set to a stunning four-person rendition of “Somewhere,” from the musical “West Side Story.” Rachel Ziegler (star of the recent remake of the musical), Ben Platt, Cynthia Erivo and Leslie Odom Jr. together gave the most vocally impressive moment of the show.

Elsewhere, BTS took the stage for a high-energy take on their hit “Butter.” Lil Nas X performed “Industry Baby” with Jack Harlow against a giant stone statue of his own face — as one does. Billie Eilish brought the heat — and the rain — during a rendition of “Happier Than Ever” that surely didn’t make the Grammy’s mop crew happier than ever (but seemed to please the crowd). (In an additional nice touch, performances were often introduced by members of artists’ behind-the-scenes teams — like tour managers.)

This year’s 11-time nominee Batiste also showed his piano skills among many others with a live version of “Freedom” that was joy personified.

H.E.R. and Lenny Kravitz — with Travis Barker on drums — also brought down the house with a rocking take of “Are You Going to Go My Way.”

What more can you ask from the Grammys?

Prior to the action on the actual show, the red carpet proved to be a parade of the flare you can only get from the Grammys.

In normal times, the Grammys would have been held January or February, several weeks before the Oscars, award season’s usual finale. (In fact, there hasn’t been a Grammys in April since 1965.) But there was something rather fitting about having award season’s liveliest red carpet capping off the season.

Lil Nas X showed that pearls are a hit maker’s best friend. Justin Bieber wore a suit made for two. J Balvin wore his heart on his head. And BTS’s Kim Taehyung, who performs as V, wore all the paper flowers at prom on his lapel and made it look good.

The biggest trend of the night was, however, another promise Noah made at the top of the show — a reference to that other show’s buzziest moment: Everyone kept other people’s names out of their mouths. And we were all the better for it.