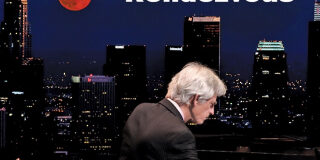 David Benoit’s highly anticipated new album, ‘A Midnight Rendezvous ‘, which hit the streets February 18, 2022, is a stellar ten-tune foray into both known and unknown territory.  Indeed it finds him recording for the very first time with a big band under his own leadership but that said this is far from being a ‘Benoit Does Big Band’ kind of a deal.  Instead the project breaks down into two distinct parts with the first seven tracks being an excursion into Benoit’s familiar world of sophisticated, high end, contemporary jazz.  The final three songs are colossal and beautifully orchestrated big band tracks: ‘Generations’ ‘Waiting For Spring’ and ‘Cabin Fever’ all brought to life by Benoit’s 12-piece powerhouse big band that includes a blazing horn section comprising among others sax players Eric Marienthal and Sal Lozano, trumpeter Wayne Bergeron and trombonist Francisco Torres.

‘A Midnight Rendezvous ‘ is up and running in fine style with the splendid title cut that Benoit co-writes with bass player Roberto Vally.  With guitar from Pat Kelley and drums from John “JR” Robinson it serves as a fabulous taster for what ‘A Midnight Rendezvous ‘ is all about and another Benoit –  Vally composition is the wonderfully contemplative ‘The Long Journey Home’ which Justin Klunk embellishes with splashes of understated soprano sax.  In similar vein is the extremely soothing ‘Home’ and elsewhere the warmly uplifting ‘Pioneer Town’ proves to be a star-studded collaboration with co-writer Jeff Lorber.  It’s title sheds light on the town in San Bernardino’s High Desert that was set up in 1946 as an 1880’s themed working movie set and which even to this day remains as something of a tourist destination.

A real highlight of ‘A Midnight Rendezvous ‘ is Benoit’s outstanding re-imaging of the Maren Morris 2019 hit ‘The Bones’ which here is delivered as a sumptuous instrumental.  Another familiar tune that benefits from a scattering of Benoit magic is the Dave Koz number ‘You Make Me Smile’ that originally appeared on Koz’ 1993 CD ‘Lucky Man’.  Melodic in the extreme it is in the superb company of ‘Floating’ where Klunk again comes up big on sax.