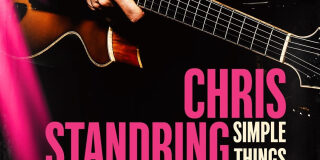 Twelve Months doesn’t seem all that long but for guitarist Chris Standring these last twelve months have been different.  They began with his thirteenth solo CD ‘Wonderful World’ only to be hijacked by a pandemic that refused to go away.  Then there was the small matter of a heart attack before getting to this, his latest album ‘Simple Things’ that will be released on May 20.

Given his recent traumas it is not surprising that the underlying theme to ‘Simple Things’ is joy and here with regular collaborators Andre Berry and Kevin Axt on bass, Chris Coleman on drums and Rodney Lee on keys that feeling of joy comes shining through.

‘Simple Things’ quickly finds its stride with the rhythmic ‘Shadow Of Doubt’ that Standring wrote having heard a particular bass line from Prince.  ‘Face To Face’ is another number that was influenced not only by Prince but also funkateer Bootsy Collins and he acknowledges this with his ultra funky yet controlled ‘Thank You Bootsy’.

Elsewhere the deeply reflective ‘A Thousand Words’ evokes a different mood and it is the smoky tones of sax-man Gary Meek that changes the game for ‘Don’t Get Me Started’ that shimmers with that distinctive Standring vibe.  In this respect it is in the good company of ‘Ain’t Nothing But A Thing’.  It features Rodney Lee and keys and was composed by Standring specifically to be performed at his live shows.

When the tempo eases the result is the charming ‘The Gist Of You’ and he keeps it relaxed for ‘And The Show Goes On’ which when one considers what the world has recently gone through the title says it all.

In terms of personal favorites, ‘Change The World’ is right up there with the best that ‘Simple Things’ has to offer and indeed the story behind it is an interested one. Standring originally wrote the tune for another artist but then, realizing how well it fitted his own style; he opted to keep it for himself.  It proved to be shrewd judgment in that released as a single it powered its way to number one on the Billboard charts.

Just as good is the wonderfully expansive ‘No Two Ways About It’ yet, all things considered, the Smooth Jazz Therapy top track is the stunning ‘Too Close For Comfort’ that even at this early stage looks sure to be among my songs of the year.

Well worth checking out.