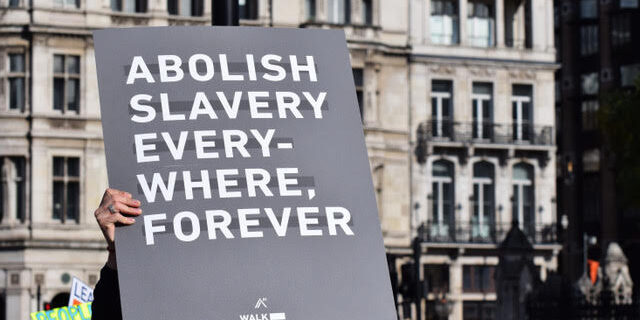 *Assembly Constitutional Amendment (ACA) 3, the California Abolition Act, has one more hurdle to clear before voters can approve or reject it in the General Election in November.

The state Assembly voted 59-0 to approve the legislation on March 21, which would amend the Constitution of California to end involuntary servitude in the state.

Should the Senate vote in favor of ACA 3 before the end of June of this year, it will go to the voters for a final decision. Article 1, Section 6 of the California Constitution currently allows the practice of involuntary servitude as a means of punishing crime. Sen. Sydney Kamlager (D-Los Angeles), who authored ACA 3 in 2020 while serving in the Assembly, says involuntary servitude is a euphemism for forced labor, a practice she says is much more nefarious and is comparable to slavery.

Kamlager formally announced the bill on the grounds of the State Capitol in March 2021. “In our great state of California — often touted as one of the most progressive states in the country — this cannot stand,” said Kamlager.

“By removing this language from our constitution, we are moving our state into the 21st century and taking steps to ensure that no Californian is ever put in a position of involuntary servitude again. Dissolving these remnants of slavery and racial inequality is more important than ever before.”

OTHER NEWS ON EURWEB: Denzel Washington Speaks on Will Smith Slapping Chris Rock: ‘Who Are We to Condemn?’ | WATCH

The 13th Amendment of the United States Constitution was ratified in 1865.

It prohibited slavery and involuntary servitude with one exception: if involuntary servitude was imposed as punishment for a crime. After the U.S. Civil War and continuing through the early 1940s, incarcerated individuals were “leased out” to plantation owners and manufacturers as cheap labor. This system, called “convict leasing,” was later replaced by “chain gangs.”

Brown says he was forced to sanitize the cells of other incarcerated people infected with COVID-19 while wearing Personal Protective Equipment (PPE) that was inadequate.

Brown told California Black Media if he had refused that assignment, he would have been written up for insubordination by prison guards, which would have jeopardized his chances of an early release. Brown was released from prison in December 2021 after serving a 24-year sentence.

“People need to know that California for so long has been the largest plantation state in the nation. Mass incarceration looms large here,” Brown said. “This is not the Deep South. Forced labor is big business here.

Taking (involuntary servitude language) off the books will make the modern-day Black Codes ineffective. It will no longer feed the machine as it once did all the way back to 1865.”

Jamilia Land is a member of the Anti-Violence Safety, and Accountability Project (ASAP), an organization that advocates for prisoners’ rights. She told California Black Media (CBM) that she applauded the Assembly’s vote to move ACA 3 forward, but she is disappointed that none of the organizations that support or sponsor the legislation received “notification for participation” when it was up for a vote. “We just want to get this thing right and with integrity.

There was a large coalition that helped make this happen,” Land said.

“It’s important that Samuel Brown, my husband, who co-wrote ACA 3’s language, and the coalitions get the recognition they deserve.” Max Parthas, the co-director of the Abolish Slavery National Network (ASNN, says 12 states prohibit enslavement and involuntary servitude but for some “exceptions for criminal punishment remain,” he added.

ASNN is a national coalition fighting to “abolish constitutional slavery and involuntary servitude in all forms, for all people.”

It supports repealing and replacing the 13th Amendment with language that fully prohibits slavery and involuntary servitude.

“Nine states permit involuntary servitude as a criminal punishment and the state of California is one of them,” Parthas said. “We’re not talking about illegal slavery. We are talking about legalized, statesponsored slavery. To see that ACA 3 is being approached is inspiring to myself and all the other states across the country working towards the same goal.”

Three states have voted to abolish slavery and involuntary servitude — Colorado, Utah, and Nebraska — and in all three cases the initiative was bipartisan and placed on the ballot by a unanimous vote of legislators, Parthas told CBM.

If the California Senate passes ACA 3, a campaign to educate Californians about successes in Colorado in 2018 and Utah and Nebraska in 2020 would be necessary, said Parthas.

“Educating is a complex, but it begins with the wording on the ballot. It must be clear,” Parthas said. “Colorado actually failed the first time by 1% because they felt that the language was confusing in what they were trying to achieve. The second time the state got it right and it passed.”

Assemblymember Ash Kalra (D-San Jose), chair of the Assembly Committee on Labor and Employment, is a coauthor of ACA 3.

In addition to ASAP and ASNN, other organizations in the state supporting the legislation are the Young Women’s Freedom Center, Native Women Unity Association, Anti-Recidivism Coalition, Prison From the Inside Out, Love We Don’t See, Courage California and the Village Advocates.