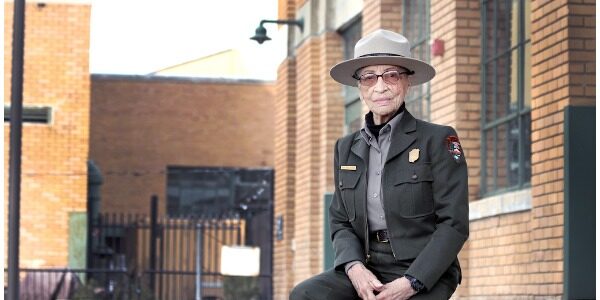 Her retirement comes “after a decade and a half of sharing her personal experiences and the efforts of women from diverse backgrounds who worked on the World War II Home Front,” NPS said in a statement, PEOPLE reports.

“To be a part of helping to mark the place where that dramatic trajectory of my own life, combined with others of my generation, will influence the future by the footprints we’ve left behind has been incredible,” Soskin said.

“Being a primary source in the sharing of that history – my history – and giving shape to a new national park has been exciting and fulfilling,” she added. “It has proven to bring meaning to my final years.”

OTHER NEWS: OUR ROOTS Spotlight on UK’s Black Minister Pastor Matthew Ashimolowo at 70

In a message announcing her retirement on Twitter, the NPS wrote, “Betty Reid Soskin, the oldest active ranger in the National Park Service, retired today after a remarkable career. Soskin, who celebrated her 100th birthday in 2021, spent the last decade and a half sharing her personal experiences and the efforts of women from diverse backgrounds who worked on the World War II home front. Her interpretive programs at @rosietheriveternps also illuminated the histories of African Americans and other people of color, and her efforts demonstrate how her work has impacted the way the NPS conveys such history to audiences across the United States.

Per the park’s IG post, “On her last day wearing the “flat hat,” Soskin provided an interpretive program to the public and visited with friends. We are grateful for Betty’s lifelong dedication to sharing her story and wish her all the best in retirement!,” the NPS wrote.

Per PEOPLE, Soskin’s tours often included her sharing “her unique backstory, which includes working at a segregated union hall as a file clerk during World War II and later becoming a political and community activist and songwriter during the civil rights movement.”

“Though I am not a trained historian — my tours are necessarily a way to share my oral history with the public,” Soskin said during an interview with TODAY in 2015. “I tell the story of the African-American workers.”