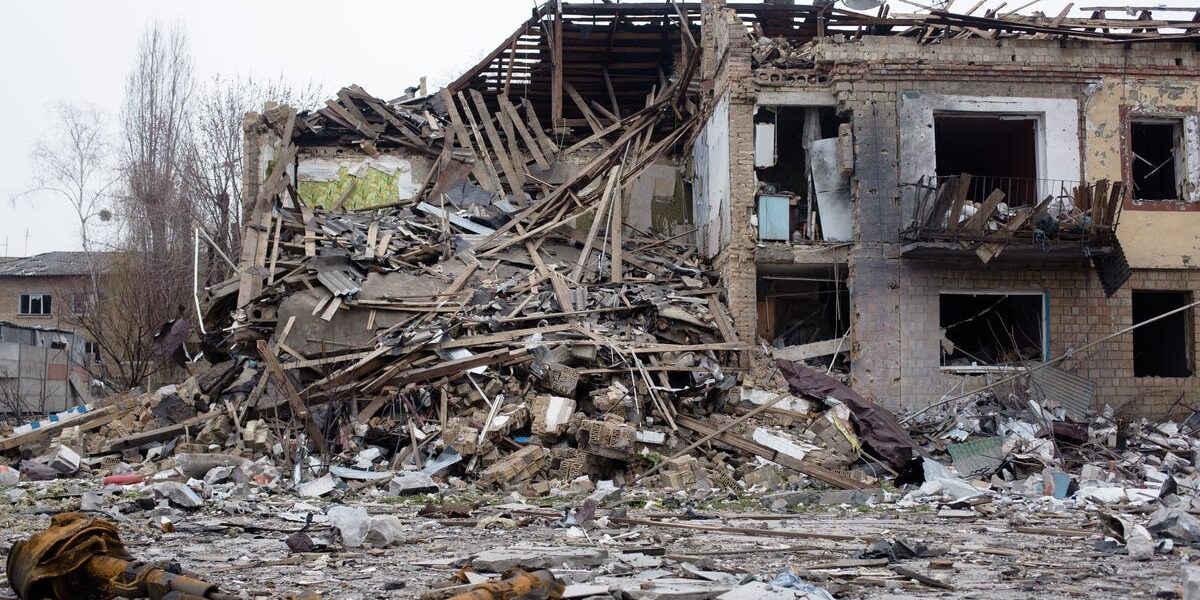 Editor’s note: This page recaps the news from Ukraine on Tuesday, April 5. Follow here for the latest updates and news from Wednesday, April 6, as Russia’s invasion continues.

The United States and the European Union plan to impose stiff new sanctions against Russia in retaliation for its “war crimes” in Ukraine after revelations of atrocities in towns near Kyiv, including the discovery Tuesday of six burned and blackened corpses.

The new penalties by the U.S. and its allies, which will be announced Wednesday, include a ban on new investment in Russia and are intended in part to “impose acute and immediate economic harm on Russia.”

The European Union’s executive branch on Tuesday proposed a ban on coal imports from Russia, in what would be the first sanctions targeting Moscow’s lucrative energy income for its war in Ukraine. The coal imports amount to an estimated 4 billion euros ($4.4 billion) per year.

“Today we are proposing a 5th package of sanctions. To take a clear stand is crucial for the whole world,” the E.U. Commission said in a Twitter post. “A clear stand against Putin’s war of choice. Against the massacre of civilians.”

THE NEWS COMES TO YOU:  Get the latest updates on the situation in Ukraine. Sign up here

►Ukraine President Volodymyr Zelenskyy drew parallels between the Russian attacks on Ukrainian cities and the 1937 bombing of the Basque town of Guernica by Nazi aircraft during the Spanish Civil War as he urged Spanish companies to cease all business with Russia in a video address to the Spanish Parliament.

►French Finance Minister Bruno Le Maire said Tuesday there is a “total determination” from all 27 E.U. countries for more severe sanctions targeting oil and coal. Europe’s dependence on Russian oil, natural gas and coal had left energy sanctions off the table amid fears the entire continent could plunge into recession.

►Kyiv Mayor Vitali Klitschko, addressing a mayors forum organized by the United Nations Economic Commission for Europe, urged countries to halt all business with Russia “because every euro, every cent, they receive from Russians – or what you send to Russia – has the blood of Ukrainians on it.”

The evidence of heinous acts committed in the towns around the Ukrainian capital of Kyiv gets more horrific by the day.

On Tuesday, Associated Press journalists saw six burned and blackened corpses piled together just off a residential street near a playground, the latest gruesome scene to emerge from Bucha as world leaders push for Russia to be held accountable.

One charred body had arms raised in supplication, the face contorted in a scream. The skull of another had a bullet hole in the left temple. A child’s small, blackened foot could be seen in the tangle of bodies.

The circumstances regarding their death remain a mystery, but they join the growing list of atrocities discovered after Russian troops withdrew from the areas around Kyiv.

The Pentagon announced late Tuesday that $100 million worth of Javelin anti-tank missiles will be sent to Ukraine to meet an urgent need, Pentagon press secretary John Kirby said in a statement.

The missiles have helped Ukrainian forces mount a fierce, effective resistance to Russian troops who invaded Ukraine in late February.

The White House has sent $1.7 billion in military aid since then.

The Biden administration will announce new sanctions Wednesday that include a ban on new investment in Russia in response to atrocities in Ukraine, among them recent revelations of barbaric acts in the town of Bucha that “show further evidence of war crimes,” according to sources familiar with the decision.

The penalties, made in coordination with G7 and European Union allies, also involve increased sanctions on financial institutions and state-owned enterprises and also on Russian government officials and their family members.

As a result of sanctions on Russia following President Vladimir Putin’s invasion of Ukraine, Russia’s economy is forecast to contract as much as 15% or more in 2022, according to the official.

“The financial system in Russia is near the brink of collapse,” White House press secretary Jen Psaki said, defending the effectiveness of sanctions to date. “It is more and more difficult for President Putin to fund this war every single day. That has an impact.”

Biden on Monday called for a war crimes trial for Putin. Ukrainian President Volodymyr Zelenskyy detailed the carnage in towns around Kyiv during an address to NATO on Tuesday, accusing Russian troops of killing “entire families, adults and children.”

Milley urges US to build new bases in Eastern Europe

The U.S. should establish permanent bases with rotating forces in new Eastern European locations as a hedge against Russian aggression, the top U.S military officer told Congress on Tuesday.

Army Gen. Mark Milley, chairman of the Joint Chiefs of Staff, said the bases could be funded by other countries such as Poland and the Baltic nations — Estonia, Latvia and Lithuania — that want more U.S. troops to provide protection from Russia. Defense Secretary Lloyd Austin said any effort to expand security in Eastern Europe is a “work in progress” that probably will be discussed at the NATO summit in June.

“I believe that a lot of our European allies, especially those such as the Baltics or Poland and Romania, and elsewhere — they’re very, very willing to establish permanent bases,” Milley said. “They’ll build them, they’ll pay for them.”

In his address to the U.N. Security Council on Tuesday, Ukrainian President Volodymyr Zelenskyy reiterated that Russia had committed war crimes and said the U.N. must hold Russia leaders accountable to show other potential war criminals “how they will be punished if the biggest one is punished.”

He also called for soldiers who savagely attacked civilians – and those who issued the orders – to face trial for the apparent massacre by Russian forces in and around Kyiv and other major cities.

The Russian military killed “anyone who served our country,” Zelenskyy said Tuesday. Women were shot outside their homes as they searched for friends and loves ones, he said, and some were raped in front of their children. Zelenskyy reaffirmed that Ukrainian forces that retook cities found mass graves, revelations of atrocities and infrastructure destroyed by Russian forces.

“They killed entire families, adults and children, and they tried to burn their bodies,” said Zelenskyy, who urged the U.N. to provide security guarantees to Ukraine. Since Russia holds veto power, though, the Security Council will be unable to act.

However, there is growing momentum in Europe to ban Russian coal, and possibly to impose sanctions on imports of its oil and natural gas, which could deliver a major blow to the struggling Russian economy.

Satellite images taken weeks ago of the town of Bucha outside Kyiv show bodies of civilians on a street, undercutting the Russian claims that Ukrainian forces staged the scene when they retook the city, Reuters reported.

Maxar Technologies provided nine images taken of Bucha on March 18, 19 and 31 to Reuters, and at least four of the images appear to show bodies on the street. Ukraine forces took back the city last week.

Ukraine says 410 dead civilians were found in Kyiv-area towns recently retaken from Russian forces. In Bucha, 280 people were buried in mass graves, according to Oleksiy Arestovych, an adviser to President Volodymyr Zelenskyy. The Ukrainian prosecutor-general’s office has described one room discovered in Bucha as a “torture chamber.”

Zelenskyy told the U.N. Security Council that satellite images show what really happened during the attacks on Bucha, adding, “we can conduct full and transparent investigations.”

Atrocities near Kyiv fuel global outrage. Will it be a tipping point in the war?

Russian forces are using banned anti-personnel mines as they pull back from cities in Ukraine, a Human Rights Watch report says.

Russia is using a device known as the Pom-3 Medallion, a mine capable of killing people within a 50-foot radius, Human Rights Watch said.

The 1997 International Mine Ban Treaty prohibits the manufacture and use of antipersonnel mines. Ukraine is one of 164 nations that signed the treaty. The United States and Russia have not signed it.

“They are mining all this territory,” Ukrainian President Volodymyr Zelenskyy said in a video address. “Mining houses, equipment, even the bodies of killed people. Too many tripwire mines, too many other dangers.” Read more here.

U.N. Secretary-General Antonio Guterres addressed the Security Council before Ukrainian President Volodymyr Zelenskyy on Tuesday, saying the world is “dealing with a full-fledged invasion” in violation of the U.N. Charter.

The result: More than 10 million Ukrainians have fled their homes and more than 4 million of them have fled the country.

The war’s victims, Guterres said, also include more than 1.2 billion citizens of developing nations struggling with rising prices and other economic issues aggravated by the war.

“It is more urgent by the day to silence the guns,” Guterres said.

Website links Ukraine refugees with hosts around the globe

A group of Harvard University students have created a website to help Ukrainian refugees find housing around the world.

Ukrainetakeshelter.com, created by Avi Schiffmann and Marco Burstein, encourages everyone with space in their homes to post a listing. Refugees and hosts must provide identity verification either through government issued ID card or passport. Over 18,000 prospective hosts have signed up on the site. On a recent day, Burstein and Schiffman logged 800,000 users.

Burstein said he, Schiffman and Irish software engineer Daniel Conlon have been “blown away” by the response.

“We’ve heard all sorts of amazing stories of hosts and refugees getting connected all over the world,” Burstein said. “We have hosts in almost any country you can imagine from Hungary and Romania and Poland to Canada to Australia.”

The credible reports of torture, rape and civilian executions in Ukraine are probably not the acts of rogue soldiers, State Department spokesman Ned Price said Monday.

‘“They are part of a broader, troubling campaign,” he said at a State Department briefing.

Price said the world has been shocked by “the horrifying images of the Kremlin’s brutality” in Bucha and other cities near Kyiv. Civilians, many with their hands tied, were apparently executed in the streets.

Others were dumped in mass graves. As they’ve retreated, Russians have also left behind land mines and booby traps to injure more Ukrainians and slow recovery, Price said.

The apparent atrocities will be one of the topics of discussion when Secretary of State Antony Blinken meets with his NATO counterparts in Belgium this week.

Allies are already discussing additional sanctions and ways to help Ukraine document war crimes for a criminal prosecution, Price said. The U.S. has contributed both money and manpower to help Ukraine’s prosecutor general compile a case.

Germany’s president is admitting mistakes in policy toward Russia in his previous job as foreign minister. President Frank-Walter Steinmeier served twice as foreign minister, most recently from 2013 to 2017, and pursued dialogue with Russian President Vladimir Putin to cultivate energy ties. Russia provides Germany with about one-third of it oil and gas and more than half its coal.

Ukraine and Polish officials have criticized Steinmeier for being too close to Russia. Ukraine’s ambassador to Berlin boycotted a peace concert with Russian artists organized by Steinmeier.

Steinmeier told ZDF television Tuesday that “we failed on many points,” including efforts to encourage Russia toward democracy and respecting human rights.