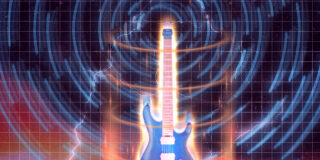 Back, and this time with a focus completely on the greatest funk of the eighties, comes Volume 2 of the genre defining series California Funk Machine which was released July 22, 2022 on the Skytown Records label.

Indeed, much like Volume 1, the driving force behind the project is none other than Billboard chart topping artist, Platinum producer and multi instrumentalist Emmanuel “U-Nam” Abiteboul who, since moving to Los Angeles from his native Paris, France in 2007, his built a reputation for knowing funk like no one else knows funk.

California Funk Machine Volume 2 is not just a collection of music, it is a concept, a style, a coming together of like minded musical brethren to breath new life into some of the hottest funk, disco, soul and jazz funk classics of that golden age otherwise known as the eighties.

This is particularly so with a bang on interpretation of the Kool & The Gang blockbuster ‘Be My Lady’ and a wonderful rendition of Dayton’s 1983 hit ‘Sound Of Music’ which has Bill Steinway on keys, Bob Baldwin on piano, long time collaborator Tim Owens on background vocals and a sensational performance on drums from Jorel Flynn.

Staying with 1983 U-Nam digs deep for true funk gold and comes up with George Duke’s ‘Reach Out’, which finds Franck Sitbon emulating the great man on keys. When keyboard duties pass to Kim Hansen the result is ‘Can’t Get Over You’ that can be found on the Maze long-player from 1989, ‘Silky Soul’. It proves to be the perfect showcase for Denis Benarrosi on percussion, Michael White on drums and, of course, U-Nam to conjure up something really special.

White soon returns, this time in the company of bass player Freddie Washington, for the Patrice Rushen song ‘Number One’. It first appeared on Rushen’s 1983 recording ‘Straight From The Heart’ on which yes, you guessed it, Washington played bass. Not only does this latest appearance complete a circle that began to turn almost thirty years ago it is also a delicious reminder that Rushen played on U-Nam’s ambitious homage to the great George Benson, ‘Weekend In LA – A Tribute To George Benson’.

All of this places U-Nam front back and center of an enterprise that includes a plethora of outstanding supporting artists. Take for example ex Stevie Wonder and Prince songstress Marva King who takes the lead on Jesse Johnson’s 1986 smash ‘Crazay’ or vocalist Tony Tatum who gets the job done with another gem from 1986, Midnight Star’s ‘Midas Touch’.

Of course when the conversation turns to funk the name of Earth Wind & Fire is never too far away. Volume 1 included two of the band’s timeless tunes and now U-Nam has come up with the seminal ‘Let’s Groove’ from the 1981 EW&F release ‘Raise’. With Kim Chandler on vocals plus Larry Salzmann on percussion this is a number designed to rejuvenate even the most tired of dancing feet and is in the good company of the often overlooked but hugely powerful ‘You Gotta Get It’ that is the perfect fit with U-Nam’s hard driving guitar.

The first single from Volume 2 to be serviced to radio is a tasty interpretation of Herbie Hancock’s 1983 blockbuster ‘Rockit’, a track that at the time was characterized by its distinctive scratch style, which came courtesy of DJ Grand Mixer DXT. Here U-Nam calls on LA based DJ, composer, music producer, remixer, and sound designer DJ Puzzle to retain that same vibe. It complements to perfection his own ultra funky trademark guitar and in doing so makes the impossible a reality by rendering it even more funky than the high octane original.

With real strings and real horns California Funk Machine Volume 2 is the real funk deal and, for the legions of funkateers out there, it will bring the memories flooding back.

For those discovering old school funk for the very first time this is a tremendous place from which to blast off with U-Nam into his very own funkosphere.

The message from U-Nam is clear – “May The Funk Be With U”.

For more on California Funk Machine go to www.californiafunkmachine.com