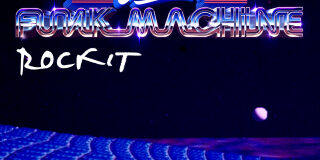 Hot on the heels of the critically acclaimed California Funk Machine Volume 1 and ahead of Volume 2, that is expected to hit the streets later this year, comes a tasty interpretation of Herbie Hancock’s 1983 blockbuster ‘Rockit’.

California Funk Machine is not just a collection of music. California Funk Machine is a concept, a style, a coming together of like minded musical brethren to breath new life into some of the hottest funk, disco, soul and jazz funk classics of the 70’s and 80’s. Much like everything else associated with this groundbreaking project the driving force behind it is none other than Billboard chart topping artist, Platinum producer and multi instrumentalist Emmanuel “U-Nam” Abiteboul who, since moving to Los Angeles from his native Paris, France in 2007, has built a reputation for knowing funk like no one else knows funk.

Indeed his contribution to California Funk Machine reaches far and wide and none more so than with the feisty ‘Rockit’, a track that at the time was characterized by its distinctive scratch style which came courtesy of DJ Grand Mixer DXT.  Here U-Nam calls on LA based DJ, composer, music producer, remixer, and sound designer DJ Puzzle to retain that same vibe.  It complements to perfection his own ultra funky trademark guitar and in doing so makes the impossible a reality by rendering the song even more funky than the high octane original.

‘Rockit’ will be going for adds in April 18 so prepare for blast off as U-Nam takes you deep into his very own funkosphere.

The message from him is clear –  “May The Funk Be With U”.

For more on California Funk Machine go to www.californiafunkmachine.com