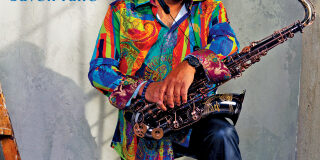 Well known for his classy virtuosity, Grammy nominated sax and flute player Najee has been one of the most influential figures in contemporary jazz for the past thirty plus years.  He enjoyed his first big break in 1983 when, with his brother Fareed, he toured with Chaka Khan.  This in turn brought him to the attention of producer Charles Huggins and it was through Huggins that Najee cut his debut long player for EMI, ‘Najees Theme’, in 1986.  The album went platinum and, as they say, the rest his history.  Since then Najee has added seventeen more releases plus one ‘best of’ collection. Now, on the Shanachie Entertainment label, he is back with his latest offering, ‘Savoir Faire’.

Ahead of this comes the first radio single ‘Dr Dolittle’ that features Frank Wilkens on piano, Freddie Fox on guitar plus a kick ass horn section comprising Mike Parlett on sax and the always excellent Lee Thornburg on trumpet, trombone and flugelhorn.