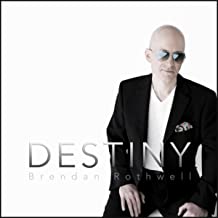 Originally from North Yorkshire, England, and now comfortably ensconced in Alberta, Canada, Brendan Rothwell is one of that exclusive group of contemporary jazz musicians who as a bass player has made his mark as a lead artist. His latest release is ‘Destiny’ which follows his 2016 debut ‘Time On My Hands’ and ‘Sentiment’ that hit the streets two years later.  Much like his previous work ‘Destiny’ finds him front, back and centre of a project for which he writes all twelve tracks and plays every instrument.

In fact it is unobtrusive piano that adds another dimension to the ultra contemplative ‘My Time’ and truth to tell the entire collection finds Rothwell predominately in tender mood.  This is particularly so with ‘Foundation’ where he sublimely blends bass guitar with keys and again with the equally laid back  ‘Solitude’.  The track is further enhanced by a seriously catchy riff while elsewhere, and for anyone who has ever been to the Californian city of Carmel, there will be instant recognition of the sun blushed location that gives its name to this luscious tune.

The first single to be serviced to radio is ‘Tell Me’.  Not only is it the sort of easy grooving cut that checks all the correct contemporary jazz boxes but also proves to be a wonderful showcase for Rothwell’s signature bass sound blended with the harmonies of synthed strings and cool, clean, Rhodes piano.

‘Devine’ is a number that shimmers with understated world grooves and the appropriately titled ‘Diamond’ proves to be yet another tranquil gem.  Reflective in the extreme ‘Meant To Be’ is an out and out mellow charmer while in terms of personal favorites the serene yet jazzy ‘Drifting’ is right up there with the best that ‘Destiny’ has to offer.  Much the same can be said of the smooth jazz friendly ‘Origin’ and although Rothwell closes out the album with the contemplative ‘For Now’ the mood of the entire recording is best summed up by the sumptuous title cut that again finds Rothwell on both bass and keys.

Brendan’s albums are available on all digital platforms and in CD format from his website at,